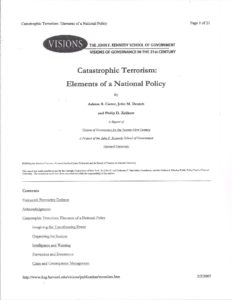 Phi Beta Iota: This was one of many such “seeds” funded by and requested by Rothschild and Zionist patrons and their allied foundations seeking to create a Global War on Terror (GWOT) as a foundation for both massive spending on elective wars and domestic police states (mass surveillance combined with the militarization of the police).  All common sense and ethics appear to have been abandoned by the participants.Harvard appears to have removed the document from public view in 2007.T he members of the Catastrophic Terrorism Group included:

Noteworthy from an intelligence point of view is this sentence, remembering that one of the co-authors was a former Director of Central Intelligence:

“The U.S. government should seek to have the legal authorities and the capability to monitor–physcially and electronically–any group and their potential state sponsors that might justifiably be considered to have a motive and capability to use weapons of mass destruction.”  Page 7.

As evidence increases that 9/11 was a nuclear event planned and executed by Israel and Saudi Arabia with fullest possible collaboration and then cover from Dick Cheney, Donald Rumsfeld, and others in the U.S. Government one has to ask why Israel in particular — with its known history of false flag events and particularly its known history in attacking the USS Liberty — was given a complete “pass.” It is as if the highest officials in the U.S. Government were totally subservient to Israel, and regarded all U.S. citizens as “shiksas” (gentile girls that “don’t count” and can therefore be treated as if they were whores). Operation Northwoods, somewhat prior to Zionist domination of the U.S. Government national security structure, demonstrated that the lack of ethics on the U.S. Joint Chiefs of Staff was by no means something to be blamed on the Zionists — the lack of ethics at the highest levels of the U.S. Government — one thinks of Lyndon Baines Johnson and his role in the assassination of John F. Kennedy (and the cover up) appears endemic to the American elite.