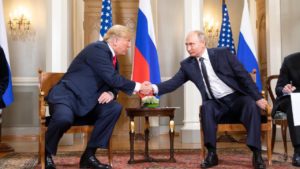 Trump and Putin: The New Paradigm in Action, Sending Traitors into Hysterical Fits of Rage

The end of the British Empire and their Zionist Dogs.

Phi Beta Iota: LaRouche takes way too much credit in his article, but he merits respect for being mostly right all these years that he has marched against the Deep State and the Shadow Government. What is really happening here is the end of the Deep State rooted in the City of London and Wall Street, the Vatican, and the Chabad Zionist Zealots as well as the Satanic royal families. Xi, Putin, and Trump are the “three amigos” with all the politico-military, socio-economic, ideo-cultural, and techno-demographic power needed to absolutely trash the 1%.  Trump will do to the US 1% what Putin did the Russian 1% created by the Gold War managed by George Tenet, Buzzy Krongard, and John Brennan.  From where we sit Brennan in particular is a “dead man walking.” There will be an economic reset between now and 7 November in the USA, including a bottom up trillion dollar spending program (new jobs and new construction), the nationalization or neutralization of the Federal Reserve, a gold-backed dollar (probably in October), and not yet decided, but we hope for it: a $3 trillion debt jubilee erasing all student debt, elderly health debt, and small business and family credit card debt. Combined with Trump’s getting $15 trillion or so back — possibly more — the game has changed decisively. All that is missing is the Trump Long Game that elevates the 99%. The media is shit — including Fox News — there is not a responsible person among the lot who “gets” that the Russian hacking story is a complete fake and Trump is doing what no one since John F. Kennedy has done properly — dealing with his counterparts face to face.  We believe Trump now understands that both the US intelligence community and the senior staffs of the Departments of State and Defense are largely worthless and have nothing original to contribute.  We anticipate that he will meet face to face with both Assad and Rouhani.

Steele, Robert. “The Princess and the Spy: A Conversation about the Unification of the Koreas – Could General Secretary Xi Jinping and President Donald Trump Earn the Nobel Peace Prize in 2019?,” American Herald Tribune, 31 March 2018. PBI BackUp

Steele, Robert. “Xi, Putin, and Trump for Life – A Few Thoughts — What If We Could Bury the Deep State & Create Peace & Prosperity for All?,” American Herald Tribune, 22 March 2018. PBI BackUp

Steele, Robert. “Rigging Elections – and Worse! The Americans Rigged Our Election, Bribed Our Government, Stole Our Gold, Killed Our Men, Raped Our Women, and Poisoned our Air, Water, and Earth – and You Want to Blame Something on the Russians?” American Herald Tribune,  10 March 2018. PBI BackUp