The President needs a truth channel that connects him directly with the 200 million eligible voters in the USA (70% of them blocked from ballot access and meaningful vote). Such a truth channel must combine text messages, emails, posts, videos, and shared documents and must not be subject to censorship, manipulation or digital assassination such as are now common to Amazon, Facebook, Google, MeetUp, Twitter, YouTube, and Wikipedia (known collectively as #GoogleGestapo).

The President can create this truth channel virtually overnight if he will undertake five initiatives in the next 90 days:

First,  real estate genius that he is, stop wasting White House real estate on scum. Cancel all White House press credentials, move them all out of the White House, and repurpose that space as shown below. 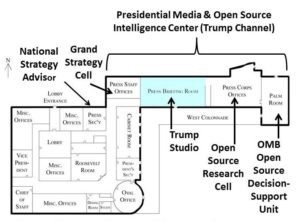 Second, attend to the preliminary investments made by Open Source Everything Inc. in BitChute and the BitTorrent approach to displacing #GoogleGestapo. The genius of the BitChute approach is that it completely by-passes the Amazon and other cloud services that are a front for Deep State and Zionist theft of and control of information. No data centers are required.

Third, and this is how the President gets 200 million eligible voters to opt in, carefully consider the combination of an Election Reform Act (#UNRIG) and a debt jubilee as a means of incentivizing the 70% who have dropped out or been blocked out by the two-party  tyranny. Below is the political landscape — in combination with the President telling the public the truth about 9/11 when he makes his speech on 9/11 2018, it is perfectly possible for the President to move from 27% (the base that voted for him including Reagan Democrats) to 70% (including Independents, Conservatives, Greens, and Libertarians). 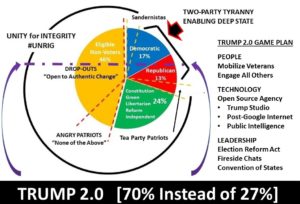 Fourth, create the Trump Studio and the Trump Network, perhaps hiring Tucker Carlson away from Fox News (where the producers seem to be holding everyone back from telling the truth), and establish a 24/7 capability that leverages all political appointees and most senior executives in the government to create a matrix of thousands of seven-minute educational videos easily accessed free online via BitChute — YouTube, which has digitally assassinated thousands of conservative channels and tens of thousands of conservative videos, should be put to death.

Fifth, and this is the hard part, something President Trump’s present team cannot comprehend or execute, he needs to make the Trump Channel a two-way channel that allows him to hear from every citizen and pulse every citizen with his Trumpets (we bury Twitter along with Facebook and Google). Imagine a Presidential Dashboard that allows him to poll 200 million citizens and hear back, via easily maneuvered screens, what the public thinks by issue, by location, by demographic. No one has ever done this before, and President Trump is the only personality capable of commanding that kind of reach.

In combination  the above will make President Trump the Great Educator — the public will for the first time be able to access the unfiltered truth about everything, to include 9/11, elite pedophilia, and the trillions stolen from the Republic by Wall Street and the Zionists.

As the Great Educator, in direct touch with the public, President Trump will on the one hand neutralize all of the fake news media and Hollywood and other control networks that serve the Deep State; and on the other hand, be able to both inform and influence the entire public ethically, legally, overtly, and persistently, issue by issue, District by District, day by day.