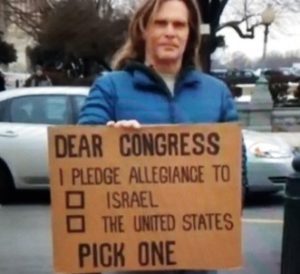 Tip of the Hat to @Tionne Terrell.

ROBERT STEELE: Too many of our citizens do not understand that the USA is in the middle of BOTH a civil war (extremists against populists) AND an inter-state conflict (Israel against the USA). When Cynthia McKinney and I made this a foundation block for our #UNRIG (Election Reform Act) campaign we were immediately attacked by the Anti-Defamation League (ADL) acting as the Zionist secret police service and using various elements it controls. I tell that story below after the graphic that Cynthia and I were going to put on 435 billboards — this is the graphic that got the ADL’s attention. They will see it again in the future — 435 times.