(Natural News) The anti-speech tech giants have combined forced with the fake news media (CNN, NYT, WashPost, etc.) to steal the mid-term elections and overthrow democracy in America. In effect, they have already carried out massive election meddling and fraud on a scale the “Russians” could even dream of.

Since President Trump won the election in 2016, there has been a concerted, highly organized and well-funded effort to overrule the American people and remove Trump from office by any means necessary. This effort has been pursued via:

These acts represent nothing less than massive, coordinated election meddling and election fraud, which is a felony crime under U.S. federal statutes.

Phi Beta Iota: We agree.  The President erred in not embracing #UNRIG and federally funding paper ballots counted publicly on site as a preliminary to passing legislation in 2019 to mandate the other eleven reforms in time for 2020. There are exactly three groups in the USA that can manipulate most of the electronic voting machines: the Republicans, the Democrats, and the Zionists. Without paper ballots counted publicly on site, combined with exit polls, we cannot be certain of an honest election. 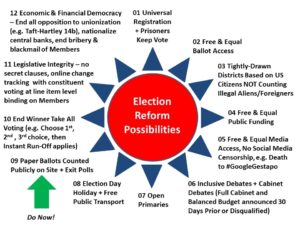 Adelson-Funded IAC and Other Groups May Soon Rival AIPAC for Influence, Power