President’s Letter Below the Fold.

God Bless Our President — the Perfect Decision at the Right Time.

Tip of the Hat to Marv Sauer for the Images

Phi Beta Iota: The Speaker is worth $200 million dollars after 30 years as a government employee.  I know of no other government employee (at least in the Executive) with a similar disparity between earnings and wealth.  Enjoy the below stories — our President could not have have found a more effective way to put the witch speaker in her place.

Fox: Trump denies Pelosi aircraft for foreign trip, after call for State of the Union delay

CNN (the least trusted name in news): Donald Trump just dunked on Nancy Pelosi’s CODEL and yes that is actually the headline 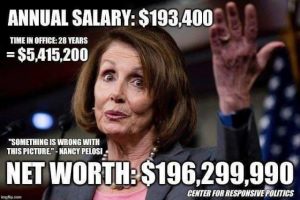 The financial cartoon is priceless. Everything is for sale in DC. Actually payoffs are distributed all over the place coming from lobbyists and foreign players. They are not called bribes, but are actually called “set aside allocations” and placed in numbered accounts in British Caribbean banks. At any one time there are 7 banking free zones where Intel and dictators and organized crime lords can bank their funds.

There is an above top secret plan using Promis software derivatives to snatch funds when the shift to a new worldwide electronic money system occurs to disempower the old guard and Cutouts as the new system is shoved into place. Many folks are going to be upset. 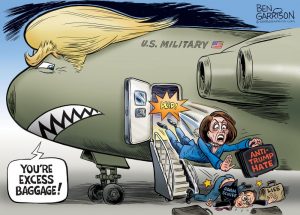