University of California religious studies professor Dr. Michael Alexander received a National Jewish Book Award for his book in which he asserts that minstrelsy—the public ridicule and mockery of the Black race—became identified with Jewish entertainers: “Jews performed this kind of minstrelsy in the 1910s and 1920s better and more often than any other group in America. Jewish faces covered in cork were ubiquitous.” 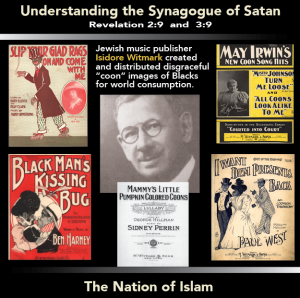 In fact, blackface and a singing style pioneered by Jews known as “coon shouting” were mainstays of Jewish entertainment, with their most popular performers, like Eddie Cantor, Sophie Tucker, Al Jolson, Irving Berlin, George Burns, and Florenz Ziegfeld, using Black-race mockery as a dominant theme. Jewish historian Dr. Jeffrey Melnick says that Jews played “a major role in the manufacture of the racial stereotypes on which American popular culture depended.”

But blackface Jews had an even more devious design. According to Melnick,

“Both Cantor and Jolson cultivated what Cantor called ‘the cultured, pansy-like negro’; Cantor also made an early blackface appearance in drag. The production of effeminacy—which is, in this context, another way of saying homosexuality—as a major modality for these Jewish men in blackface was also tied up with their display as children…”

Madison Avenue, or The Anti-White Agenda of Jewish Ad Agencies

While Israel sits nice and comfy behind its wall, Jewish enablers have been pushing white genocide via replacement with hordes of darks flooding the Euro nations of earth.  Now, while this program has been in place since the end of WWII, Jews are currently ramping up their attacks against we whites in advertising.  Just as with population replacement, the end game of Jewish advertising is also nothing less than our extermination.