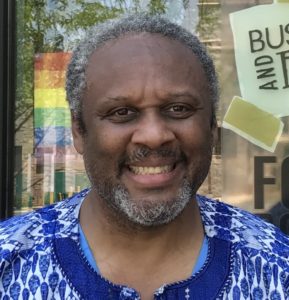 There is a major shift in the political realm of Black American voters that is the equivalent to a philosophical civil war against the Democratic Party. The mainstream media has for three years falsely claimed that Blacks were tricked by Russian intelligence units into voting for Donald Trump. This propaganda is wholly false, and major grassroots players like filmmaker Curtis Scoon have created powerful audiovisual weapons that have imploded the vice-like grip on the loyalty of African Americans. Scoon’s film “Black, White, and Blue” destroys the leftist domination over the narrative of Black sentiments about America. Scoon’s film represents the hidden voice of “shy Republican” Black voters who played a decisive role in the presidential defeat of Hillary Clinton in 2016. Scoon’s sharp pro-Black and pro-American perspective is reflective of millions of African Americans who have quietly abandoned the burning Democratic House.

I am seeking your help in aiding so-called “Black Russians” like myself and Mr. Scoon, Paul McKinley, Mark Carter, Denise Johnson, Larry Pinkney, and other Black American Trump supporters who convinced over 3,000,000 African Americans voters to sit out the 2016 election. In Chicago, Republican Blacks forced Democratic scion Rahm Emmanuel to decide to forgo serving another term. In Missouri, Maryland, Mississippi, Florida, and Georgia angry anti-Democratic factions among Blacks voters caused the defeat of Democratic candidates.  In spite of the fact that the racist fake news media has ignored this historic event, the same forces have already neutralized the Kamala Harris Presidential race by aggressive attacks that have mortally wounded her campaign’s ambition to capture the Black vote. Cory Booker’s candidacy is being attacked in social media, and, just as the anger of Blacks against Kamala has been ignored, the mainstream media appears to delight in reporting that there is a monolithic Black groundswell of support for Democrats.

I need your help in putting Curtis Scoon, myself and others who prefer Trump in front of audiences that socially-engineered-cognitive-dissonance and spatial segregation, typically, denies us a hearing. Curtis Scoon is the real deal and a fascinating man who can cover any topic. I need your help to force into the public square the Equality Act and its danger to Americans of all ages and demographics. Please share my interview with everyone and remind them about the Film “Black, White, and Blue” is on Amazon, IMBB, Vimeo On Demand, and it is a very strong film that has mostly 5-star ratings in Amazon. Please note the Black vote for Trump gave him the election in 2016, and this process will be repeated in 2020. The Black people turning their backs on the Democrats signals the end of the hegemony of the two-party duopoloy.

ROBERT STEELE: It has been my blessing, through Dr. Cynthia McKinney, to meet Black Leaders such as Dr. Randy Short, and I remain utterly dismayed by the incompetence even insouciance (I am trying not to use the word arrogance) of the Trump Administration. There is no one of color — never mind Ben Carson — in the Trump Administration. He needs to understand this issue and he needs to start bringing key black leaders on board.  He could start with appointing Carol Moseley Braun to the position of Ambassador to the United Nations.  He could bring Dr. Cynthia McKinney back as an advisor (for 90-180 days of trust building and mutual learning) and then ideally as a replacement for Vice President Mike Pence who should be sent home with thanks, never to return to the national scene lest his dark angels be exposed. He should embrace and present to Congress #UNRIG – Unity for Integrity to put down HR 1 that is a scam setting the stage for non-citizens to vote, and make it possible for Independents and small parties — including perhaps a Black Party — to be represented in Congress. The time  to smash the Zionists and the Deep State and the Shadow Government has come.  If Trump will not do it others will.  When 9/11 disclosure is made, in time to impact on 2020, Trump needs to be driving the bus or he may just get run over by the bus.

32 Zionist Strikes (Zionism is Not Judaism)