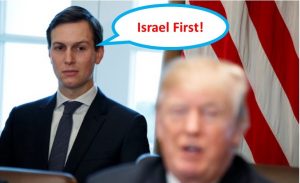 Trump Ordered Officials to Give Jared Kushner a Security Clearance

Mr. Trump’s decision in May so troubled senior administration officials that at least one, the White House chief of staff at the time, John F. Kelly, wrote a contemporaneous internal memo about how he had been “ordered” to give Mr. Kushner the top-secret clearance.

ROBERT STEELE:  My CIA colleagues were absolutely right to refuse to give this Zionist agent security clearances.  James Kelly betrayed his oath of office in failing to go public when the President ordered him to grant the clearances, as did the leadership of the IC in going along.

The President can survive this but he absolutely must expel Kushner from the White House or he will not recover in time for 2020.

Bolton, who is also an Israeli citizen, should be fired at the same time, while Stephen Miller, an Ashkenazi Jew all too close to Kushner, should be put on notice: one citizenship, one loyalty, America First.