Barbara Honegger, one of the other 26 people who were brought together to create Memoranda for the President: 9/11 Truth, attended a Reagan-era Cabinet meeting at which CIA Director William Casey said

”We’ll know our disinformation program is complete when everything the American public believes is false”.

While I do not doubt Ms. Honegger and certainly do not challenge the veracity and validity of the arttitude on the part of the fellow who was previously the SEC Chairman, Reagan’s campaign guru, and the businessman who built the media giant we now know as ABC-TV (which feeds us our daily diet), I believe the reality of our situation needs to be better expressed.

As someone whose professional intent was to study mass communications, media production, broadcast news and the like, I can and have reported out a deep record of Israeli/Judaic influence into the arts and practices of the media.

It is my perception that this pervasive and successful attempt at covert influence and control has produced not just an erroneous perception of what is happening, but a destructive “que sera, sera” attitude, a lack of curiosity and willingness to read and think, and — most damnably — the lack of the ability and/or desire to interact and communicate with others about the ongoing dynamics of our own social milieu and culture [in other words, to become active and do something about it].

Kevin Barrett said the other day that we had become hynoptized. I think we have been driven into a state of submissive anomie. 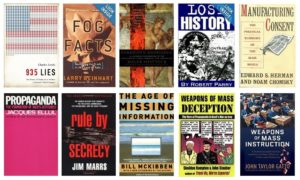