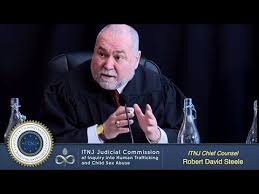 Benedict, who resigned as pope in 2013, argued in a column translated for the National Catholic Register that social upheaval in the 1960s led to wider acceptance of pedophilia.

ROBERT STEELE: I have taken pains in my engagement as Chief Counsel of the Judicial Commission of Inquiry into Human Trafficking and Child Sex Abuse (actually a non-profit educational endeavor chartered by international treaty) to point out that the Catholic Church is not the only institution to have failed.  So also have the Mormons, the Boy Scouts, UNESCO, etcetera. In brief, EVERY institution — from academia to commerce to government to religion — has failed us in the past 6,000 years, in part because we have all been mis-led with respect to the matters of God and Cosmos. At a more practical level, if books about the Deep State generally and the Tavistock Institute and the CIA specifically are to be believed, the pill, working mothers,  the sexual revolution were all part of degrading the intelligence, integrity, and imagination of the human “cattle,” for the convenience of the cabal. I am still sorting this all out; while I enjoyed a superb education, it was not until 9/11 that I really started to question everything, and experienced the reality that virtually everything we are being told is a lie.  To emphasize that point, here is the quote:

“We’ll know our disinformation program is complete when everything the American public believes is false”?

I am not ready to write a new book yet — and may never — but in the meantime I recommend the works of David Icke. As best I can tell, all of our institutions, without exception, are corrupt to the bone and in constant betrayal of the public trust.  This particularly includes the US Congress,  the US secret intelligence and counterintelligence community, the banks, and religions. We are in the middle of a cosmic fight for the future of humanity at three levels:

We are all blessed to be living in interesting  times.  I have no idea how it is going to turn out but I am very glad to be in the midst of this fight.

REVIEW: Caesar’s Messiah: The Roman Conspiracy to Invent Jesus UPDATE to Include Rebuttal