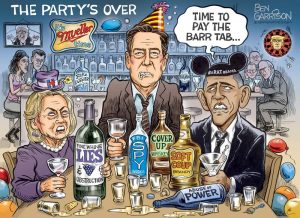 ROBERT STEELE: Within the US Intelligence Community, I consider John Brenna, James Comey, James Clapper, and Michael Hayden to be indictable for treason (high crimes and misdemeanors), each of them betraying their oaths of public office — to support and defend the Constitution of the United States of America against all enemies domestic and foreign. Absent justice at the highest levels, the President cannot and should not trust the US intelligence and counterinterintellience communities about anything at all.

As a side note, if the FBI were at all honest, Jared Kushner and his father would be in jail  today. Our President is correct, we have a rigged system, but as long as his in-laws are getting away with high crimes, he lacks standing on this issue.

William Binney: The Russians Did Not Hack the DNC or Anything Else!

Robert Steele with Javad Heirannia, “Counterintelligence Failure by CIA and NSA in Venezuela: An Opportunity for President Donald Trump to Reform US Intelligence,” American Herald Tribune, 10 May 2019.  PBI BackUp also in Tehran Times (13 May 2019).