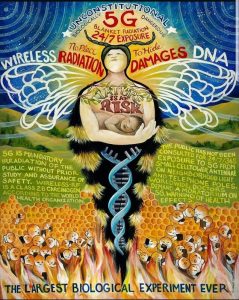 ROBERT STEELE: I have concerns and reservations — the recent Presidential announcements enabling 5G, glysophate, and vaccines — and his failure to make arrests — are all daunting to me.  HOWEVER, I am with this President to the end. I will work toward his re-election.  I am doing this for three big reasons:

01 I am in touch with some extraordinary sources that assure me that 5G’s threat can be by-passed, and all of the toxins including those being maliciously inserted into vaccines, can be neutralized, when the time is right.  I believe this.

02 There is not another President since Washington, Lincoln, or Reagan who could have gotten so far against  the Deep State and who offers so much promise against the Deep State. This President has allowed my voice to be heard, and that alone is going to be worth quite a bit in 2024 and beyond.

03 George Will’s new book The Conservative Sensibility draws the battle lines clearly. We are in a fight for the 2nd American Revolution. It is a fight between those who believe in individual (and state) sovereignty and very limited federal government, and particularly believe in the  First and Second Amendments, and the so-called progressives who believe in subordinating everyone and everything to a federal monster that feeds those who bribe and blackmail its legislators — a federal monster that enables the Deep State 1% to treat all of us as fodder — disposable deplorables as Hillary Clinton would put it.  ENOUGH!

In August, at the Dimensions of Disclosure event, I will be delivering what will be, in effect, my manifesto for the future of the USA, Earth, and our cosmic role as a force for good. I have very high expectations for the President’s 4th of July speech and hope that Stephen Miller has the brains and the balls to reach out to George Will, because George Will is the incarnation of James Madison and Thomas Jefferson, and I want nothing less than a Gettsyburg Address for the ages on the 4th of July.

Bottom Line: Our world is better with Donald Trump as President.  He has earned four more years, and as President, made it possible for the rest of us to finish the job: people, not parties, authentic, inclusive, and truthful.

George Will: Wrestling with God, Conservative Sensibility, and the Dangers of Libertine Progressives