Big Picture. Unless President Trump gets a grip on #GoogleGestapo and MSM, there will be massive “legal” election interference in the way of smear pieces, fake news, and the digital assassination of conservative voices, while polls are totally manipulated. On the other hand, given the initiatives he has the power to take on his own, and the solid victories of populists in Europe, there is every reason to believe he will be re-elected.  As the incumbent, even with low popularity, if the economy holds at 2.5% or better, the President will be re-elected. 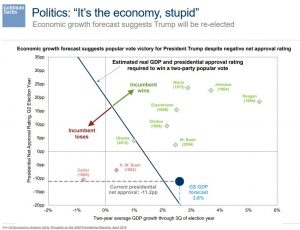 Budget Busters/Economic Context.  The greatest threat to Trump’s re-election is not impeachment, but a collapse of the booming economy.


Candidates. As we observed from our first report, John Hickenlooper (with the right black female running mate) is the man to beat among Democrats.  Most do not get that yet or are in denial. He will challenge Trump across all issues  and all demograpics, with an emphasis on all the promises  Trump has failed to keep, combined with Trump’s tax gift to the rich and his outright doubling down on the military-industrial-intelligence complex that is 50% waste, cannot win wars, and provides at best 4% of the intelligence the President needs. Trump remains strong with both incumbency and the economy in his favor, his new economic announcements will seal the deal.  Democrats on a lose-lose path — Biden loses, other loses.

Demographics. Rolling Thunder is  not just about blue-collar veterans and solid citizens, it includes grandmothers epitomizing the free spirits for life of our pioneer and farmland  heritage. They are suffering because Harley Davidson is a cheap company with zero patriotic value, thinking that $50K a year is an ample donation.  It is not. Harley Davidson should be donating $1M a year to Rolling Thunder, or kicked off the island. Iowa is a case study — and the center of a complex universe. In a new twist the left is trying to make the census question about whites when it is actually about ending the practice of counting foreigners and illegals in allocating Districts — California will lose four house seats because of this census question, because it will change allocations to be founded only on eligible US voters not all adults including illegals and foreigners. The DNC is out of touch with the working class — Trump speaks to them in ways they understand. It is unlikely the DNC will recover in time for 2020. American Asians on the rise politically.

Down-Ticket Impact. Liberalism is on the run.  Patrick Buchanan says so.


Election Reform/Electoral College. It would appear vital for the President to educate America on why the Electoral College matters as a means of assuring the integrity for the federation of the United STATES of America.  We are seeing blithering idiots from CNN who either do not know or are lying for effect when they fail to point out that the President is supposed to be elected by the STATES not the public (the Senators are supposed to represent the STATES, not the public, the 17th Amendment, which may not have been properly ratified, needs to be rescinded). Even if the President refuses to introduce #UNRIG Unity for Integrity (election reform,  12 points) in time for 2020, he should do so in time for 2022 and 2024, and in this way he can begin educating and mobilizing the totality  of the public toward an honest Congress in 2022 and a coalition presidency in 2024.

Impeachment/Investigations. The Democrats appear oblivious to the dropping of the disclosure hammer, a hammer that has already brought down the Prime Minister of the UK, one of two countries (the other was Israel) known to have interfered in the US election. Meanwhile everyone else is saying there is no way impeachment will happen. Professor says impeachment is the only thing that could stop Trump re-election.

Issues.  Climate change may be emerging as an issue. Sadly neither the President nor the Democrats will be talking about holistic analytics an  true cost economics. Climate change is a nit — a pimple on the donkey’s ass. What really matters is getting to a Congress that is honest and makes evidence-based decisions about everything while demanding a balanced budget from the executive.

Zionist Influence on USA. This is the single most censored story in the USA. See link below for a look at coverage in the past — Zionist influence on US elections is a FORBIDDEN TOPIC.

The Worst 2020 Election Interference Will Be Perfectly Legal

Goldman Says Trump Will Win In 2020, Unless…

Rolling Thunder’s last roar? Trump says ride will be back; organizer says not so fast

Bret Stephens: Trump Could Win In 2020 If The Left Can’t Speak To The Working Class

Is the Liberal Hour Ending in the West?

The Worst 2020 Election Interference Will Be Perfectly Legal

Tlaib: Impeachment not about the 2020 election

Why television will be essential to the 2020 election

DuckDuckGo: Zionist Influence on US Elections