Big Picture. 2020 is at root about the future of America — restoring the Constitution as the conservatives desire, or trashing it completely as the liberals fronting for the Deep State desire.  There are three battlegrounds: the economy, where Trump is winning, and social media plus Zionist control of Congress where Trump is losing. George Will is discounting Trump and favoring Hickenlooper on the basis of better ideas and a better grip on the larger public pulse. Hickenlooper-Mckinney, in my personal view, could challenge  Trump in a positive manner.


Candidates. Warran plays dress-up for President.  Biden is a racist and a Catholic — and he is no John F. Kennedy. Kamela Harris is a fucking idiot. 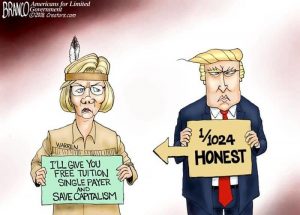 Demographics. Trump’s base is fragmenting — Democrats are noticing. Trump is thinking big, big, big. 2020 will be about extreme on extreme, no center. Romney may not support Trump and Trump could face a major challenger true to conservative principles.

Election Reform/Electoral College. Common Dreams has it right — Trump is blowing a chance to implement Electoral Reform in time for 2020 as well as 2022 and 2024. Beto O’Rourke is half-assed.  Well-intentioned but ignorant. Rob Urie misses the point on why the Electoral College matters but he is right on target about the manner in which two parties have excluded 70% of the eligible voters from the process.  We do not have a democracy.

Issues. Abortion is becoming central — when does life start? How does one balance rights of mother with rights of child? Economy bodes well for Trump.


Technology. Memes (images, sometimes with an idiot phrase easily remembered) are going to be a new standard communications path. Podcasts appear to be a rising force. All US election machines are risk (hint: they were designed by Diebold for fractional voting fraud — get over it and order paper ballots plus Instant Run-off, restore integrity to the election process.


Zionist Influence on USA. Most of the big money is coming from Zionists — Adelson to Trump on the right, Bloomberg, Stayer, Soros on the left.

The Constitutional Stakes of the 2020 Election

Kamela Harris is Fucking Idiot — And CNN Should Be for Sale

Rumblings from Trump’s base could shape Democrats’ choice for 2020

Importance of Candidate’s Abortion Stance Increases Ahead of 2020 Election: Poll

Opinion: ‘It’s the economy, stupid’ spells trouble for Democrats in the 2020 election

The 2020 meme election: How memes became a mainstream tool in politics

In race to 2020, no podcast is too small for Dem candidates

US elections in 2020 need massive overhaul to protect them, security experts argue

These Democratic billionaires could help shape the 2020 election