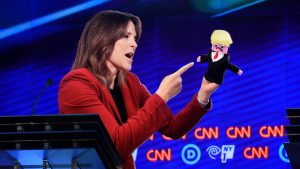 Photo is fake news (the Onion) but noteworthy. The Zionist media machine combined with Republican endorsements (Mike Huckabee, Donald Trump Jr.) have put her in front. She cannot win, but she can impact on all of us for the better.

ROBERT STEELE:  I first encountered Marianne Williamson in 2001 [Review: Imagine–What America Could Be in the 21st Century] which validated for me her authenticity when she again came into my sights with Review: A Politics of Love by Marianne Williamson with Additional Links. I know Thom Hartmann, who is acknowledged as one of her ghost-writers (probably most of the policy substance complementing her inherent gifts in the consciousness, forgiveness, and spirituality arenas) — 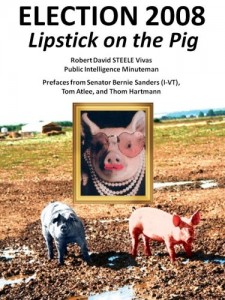 Thom is the author of one of the guest prefaces in my own free online 2008 ELECTION 2008: Lipstick on the Pig that could be useful to Marianne Williamson as she fleshes out what appears to be a skeleton staff with few thinkers (but a direct line to Dennis Kucinich).

I consider her to be the only authentic candidate for the Democratic nomination — pending word on whether Dr. Cynthia McKinney, aka Goddess, will join the race — and I consider her general message so important that I send copies of her book to the First Lady and Kellyanne Conway at the White House, where a Zionist troll appears to have blocked the mail (it was quickly accepted after I filed a formal request for a US Postal Service investigation — obstructing the delivery of the mail to its intended receiver is a federal felony). 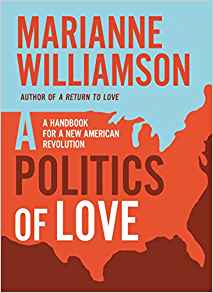 Williamson has weak points — she may well be a victim of earlier abuse and mind-control and still vulnerable — and she does not yet have a grip on how to integrate team-building with holistic analytics and true cost economics to demonstrate that BOTH the Democratic AND the Republican parties need to be “put down.”  This is the only way to #UNRIG the process so as to make way for people not parties, and for 100% access  to the ballot and an honest Congress that makes evidence-based decisions in the public interest, rather than selling policy (and taxpayer revenue) to the highest bidder. The Deep State and its complex get a 700 to 1 return on investment from their bribes, and those that do not respond to bribery are blackmailed, the 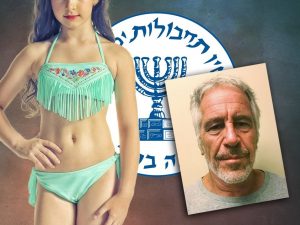 There will be confusion and a scramble now. The Zionists will see in Williamson a potential Manchurian Candidate, someone they can get all the way to nomination with someone of great policy substance and integrity (Dennis Kucinich comes to mind) as the VP — with  the stellar advantage — Trump would call this a central casting advantage — that he is shorter than the potential presidential nominee. If elected, absent an extraordinary Cabinet and a very strong intelligence and counterintelligence team, she will be a puppet and easily manipulated even with Kucinich as VP. Her greatest value — assuming the DNC does to her what they did to Bernie Sanders last time — could be on the down-ticket, if (highly unlikely) the Democrats wake up and realize that her “politics of love” is what most Americans, regardless of party, actually want. Still if Donald Trump was an “accidental president,” there is no reason to doubt her ability to go the distance if she can scale rapidly.

And of course you have the wild card options: Biden-Williamson, Sanders-Williamson, Williamson-McKinney, Williamson as a Libertarian.  It’s going to take a while to see how she develops, but this is one genie that is not going back into the box.

Her greatest value to me is as a potential champion for #UNRIG: Unity for Integrity, as a voice spanking both parties for excluding 70% of the voters from meaningful participation in elections at the national, state, and local levels where the system is rigged, as our President stated during the campaign.

There are twelve specific reforms that must be implemented in time to create an honest Congress that is one  third NOT Democratic or Republican, and if she is willing to both  run a serious presidential campaign that announces a coalition cabinet and balanced budget in advance, with twelve core promises (some over-lapping what President Trump has promised but not delivered) then she could be an EPIC voice and have a lasting impact on restoring America the Beautiful.

She could also be helpful in pressing our President on keeping his promises, by keeping those promises in the public mind.  The below links shows our President as one third green, one third yellow, and one third red.  He is on most dangerous ground in failing to exit from the Middle East and Central Asia, and failing to force the issue on 9/11 disclosure. Imagine if she became the only Democratic candidate always accompanied by a six foot high poster of the Trump Report Card.

None of the other Democratic candidates have the authenticity and inherent commitment to inclusiveness and truthfulness that Marianne Williams has. This is her moment.  I say this as a strong supporter of our President (the first to say he could be elected, in August 2015 — Jefferson Session endorsed him in February 2016) and a strong believer in the need to restore the Constitution, destroy the Deep State and its Zionist underbelly, and return to the concept of America the Beautiful rooted in Christian family values.  Red, white, black — with reparations — works for me. Muslim and Zionist racism and their being above our laws and able to treat us as deplorable disposables, does not work for me.  Somewhere between Donald Trump and Marianne Williamson there is a commonality for transpartisan redress.

UPDATE 1: Earned Media Off the Charts

LGBTQ: Who is Marianne Williamson & why should LGBTQ people care?

National Review: The Meaning of the Marianne Williamson Moment

Quartz: MIRACLE WORKER – Marianne Williamson is campaigning with the language of self-help and spirituality

Slate: Marianne Williamson Doesn’t Want to Be the New Age Candidate. But Look Who’s Working for Her.

The Hill: Young Turks host says Marianne Williamson proved why she ‘deserves’ to be on debate stage

Townhall: Marianne Williamson Is Way Out There, But She Won Tonight’s Debate

Vanity Fair: “No One Decides to Run for President Impulsively”: Marianne Williamson Explains Her Magical Thinking

Yahoo: America Could Have Its First Single President in More than a Century

UPDATE 2 integrated into above.  UPDATE 3 below.

CNN: Williamson and Yang play the authenticity card, and Democrats love it

Phi Beta Iota: The CDC is a criminal organization in the pockets of the Deep State with its own court of injustice. Williamson is correct on vaccines.

Forbes: What Marianne Williamson Can Teach Every Democratic Candidate For President

New York Daily News: Marianne Williamson is the big winner of the DNC debates, especially if she doesn’t get the nomination

Rewire.News: As a Disabled Person, Marianne Williamson’s Ideas Terrify Me

Phi Beta Iota:  Too many fat, lazy, retarded people are on disability because they are so stupid and so lazy  they have  gotten very fat and the government is so corrupt it treats lazy and stupid as a disability. We should not have to pay for lifestyle disabilities.  If diabetes were removed from covered care, we would balance the federal budget overnight.  See below.

Slate: Marianne Williamson Gave the Clearest—and Best—Answer on Why the U.S. Should Pay Reparations

Phi Beta Iota: She is wrong to apologize.  She was right the first time.  Most psychiatry is witchcraft and a scam.

RealClearPolitics (Donald J. Trump Jr.): Marianne Williamson Is a Harbinger of Doom for the Democrats

Well and Good: Marianne Williamson shows why science needs to be an integral part of the wellness conversation

Phi Beta Iota: Bullshit.  Most history, most medicine, most science is at best half-baked and more often than not, a lie.  Other than Natural News by Mike Adams, most so-called health sites are themselves scams.