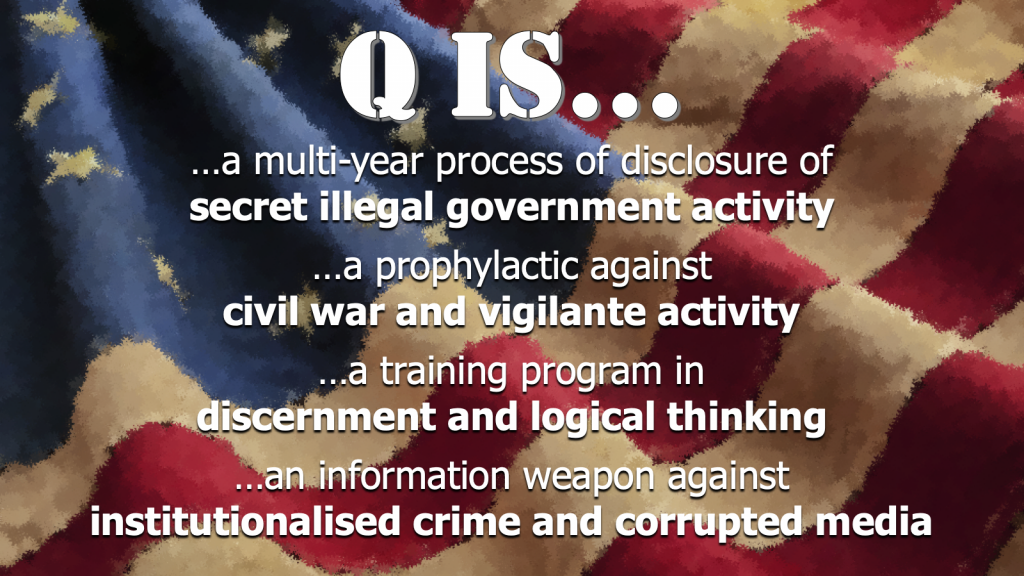 The 4 Functions of Q (Full Text Below the Fold)

We are coming to the end of summer, with the Labor Day holiday weekend now in the past. The evenings will grow darker and cooler, people will return indoors, and the TV screen will regain their attention. The collective consciousness will turn back to the business of government — and criminal justice.

Senator Graham has made a formal request to Attorney General Barr for him to declassify the material related to the illegal spying on the Trump administration. This Spygate scandal is finally going to hit the public realm, exposing the corrupt alliance between the DNC, a compromised justice system, and the crooked mass media.

This sets up a cascade of revelations of high-level criminality — together with further media complicity to cover it up. This collusion includes both the mass published media, as well as social media platforms. YouTube, Facebook and Twitter masquerade as neutral communications services, but are really illegal gatekeepers of information.

This denouement to the scandal was long anticipated: a collapse of credibility of the media institutions that are meant to support the free flow of information and hold power to account. It is a crisis of trust the like of which has never been encountered before.

This is where the Q operation comes in: we have had nearly two years of preparation for this moment. Citizen journalists and alternative media are already taking up the mantle of reliable and truthful sources, overtaking the discredited corporate mass media in both audience size and engagement.

I was recently asked to summarise “what is Q?”, and came up with four core functions that this military intelligence program implements for these extraordinary times.

There are over 3500 “drops” by Q to date, but the core tale of corruption is told in the first 100. Anybody can go read them in an hour or so. The very uncomfortable truth is that the US Government has long been beholden to an institutionalised system of transnational crime, that has also hijacked many other countries.

Q gave open source researchers a framework in which to “dig” for data on this system of criminality. The belief that Hillary Clinton — essentially a puppet of that system — could not lose the 2016 election had made them careless, and left an extensive public evidence trail. The result is a vast trove of vetted data collated by anonymous citizens working in collaboration worldwide.

To say that what has been uncovered is disturbing is to miss the point: not only are many “conspiracy theories” true, they are interlinked as part of a single plan to destroy freedom and bring on global totalitarian rule. Your worst nightmares of betrayal and genocide were being actively implemented — by those who had sworn to serve you.

Specifically, Obama was not a legitimate President, and every part of his legacy will be dismantled. He is the greatest political fraud ever perpetrated, and that is against some stuff competition from his predecessors. Hillary Clinton was meant to be a continuation of that fraud to its destructive conclusion. The corporate media have known this all along, and exposure of the plot will destroy them.

At the heart of this psychopathic system of criminal power is the multi-generational abuse of children, tied to an ancient sex and death cult. Government by occult forces seems like science fiction, but it turns out to be the world we live in. Understanding this ugly reality is the key to ending the evil that it perpetuates.

2. Q is a prophylactic against civil war and vigilante activity

The last two years have seen a nonstop battle between the mainstream and alternative media for “narrative supremacy”. It has involved the mass media pushing the Russiagate hoax, which now lies broken and exposed as a fabricated and paid-for lie.

The mass media had to attempt to unseat President Trump in order to preserve themselves. Whilst the attempted coup it represents is very serious, in many ways this has proven to be a distraction. The public has been kept engaged — and dare I say even entertained — with this drama, whilst the painstaking process of cleaning up the justice system has quietly taken place in the background.

Q has given activists for justice a focus that they otherwise would have lacked. Q has offered an angry public hope — grounded in practical progress — of a peaceful outcome using the lawful system of civilian and military justice. For the real challenge is not arraigning the traitors, but doing so in a way that doesn’t cause society to collapse.

As the treason of many trusted politicians, business leaders, and military personnel is now revealed, there is an established Q movement with a track record of peaceful investigation of the truth, rather than vigilante activity seeking revenge. The collapse of trust in the mass media — who covered for these crimes — will not leave a vacuum for troublemakers to occupy.

The Q drops demonstrate that what is unfolding is all part of a managed process of justice that has been thought through with military precision. It gives ordinary people awakening to the nightmare confidence in the plan for resolution, and a good reason to reject those who would wish to cause harm by inciting violence or insurrection.

3. Q is a training program in discernment and logical thinking

Decades of media brainwashing and social conditioning have led much of the public to mistrust their own judgement, and to disbelieve the evidence of their own eyes and ears. The weaponisation of mass media against the very citizens it was meant to protect creates deep social division and mutual distrust.

Propaganda has been packaged as journalism, and the skill of distinguishing these is not offered in schools. Quite the opposite is true: public education has become indoctrination. Criminals have taught people to shut down rational inquiry on hearing the term “conspiracy theory”, and hence ignore their crimes, based on the threat of being ridiculed and socially ostracised.

Q is like a grand bootcamp for digital soldiers, who have to learn to deal with this complex and contentious information landscape. The Q drops frequently use the Socratic method, encouraging learning via asking questions, rather than providing packaged answers. Q incites people to think for themselves — rather than telling people what to think — and to use logic rather than emotion.

Q has helped us to understand what kinds of data we can rely on in a data environment filled with disinformation, and what we should be wary of. We have had to become more judicious in our selection of valid sources, and more discerning about future dates and events that may or may not transpire. Q has validated our trust in evidence and reason over purported authority.

Two years of the building of this “Q Army” has created a mass movement of people who question everything they are told, taking nothing at face value. We have learned to expand our thinking, and are open to new possibilities that would previously have been dismissed as too “out there”. For the truth really is stranger than fiction — by far.

4. Q is an information weapon against institutionalised crime and corrupted media

The corporate media is the most powerful weapon of the criminal “deep state” that is right now being removed from power. The media’s deceit has captured the souls of many of our compatriots into a web of lies and hatred. To counter this, Q has created a formidable foe to take on the “fake news”, as digital soldiers dissect every falsehood in real time, 24×7.

In the coming battle, the corrupt mass media will attempt to spin everything to their advantage — no matter how indefensible. They have already been working hard to get ahead of the story, setting up doubts about video evidence as being “deep fakes”; suggesting that paedophilia is a sexual preference rather than a serious crime; and even attempting to normalise cannibalism. (The word “pedovore” is one I wish I hadn’t had reason to encounter.)

Ultimately the public are going to have to decide who is telling the truth: is the mass media offering journalism or propaganda? Can it be really true that they are just one coordinated narrative under so many seemingly independent brands? How could such an unethical system of mind control ever be possible in a modern technological age?

The Q operation has been set up with the ultimate catch-22 for a corrupt corporate media, proving conclusively that it is pure propaganda, and not legitimate journalism. How so? The identity of Q is deliberately opaque. Q is not a “formal” program of the US government or military. Yet Q offers hundreds of data points that demonstrate Q is indeed linked to the Trump administration.

Any ordinary person can seek these out and validate them. They are beyond compelling. Meanwhile, the corporate media writes endless hit pieces on Q denouncing everything Q offers as “debunked conspiracy theory”. They write ad hominem attacks on those who think for themselves and reject the media’s false narrative.

Yet these “journalists” never do the most basic investigative activity of asking President Trump whether Q is legitimate, and if he is connected to it. This “Q question” turns Q into the most powerful (and paradoxical) information weapon in history: the credibility of the entire mass media is on the line, and every day they fail to ask it more people come to realise they are not in the business of journalism.

The mass media’s refusal to ask this simple question constantly destroys their credibility, with no action or effort required by the forces of truth. As Spygate and other scandals unfold, the outrage of the public at the complicity of the media will grow, and demands for the “Q question” to be asked will become irresistible.

At that point, the corrupt corporate media will have triggered their own demise: every assertion of Q they dispute will necessitate public proof. An avalanche of disclosure will cascade down and bury them. Every previous hit piece they wrote on Q will act as an epitaph — and a warning to those who might consider such organised lies in future.