The Rise of the Western Spy Assclown 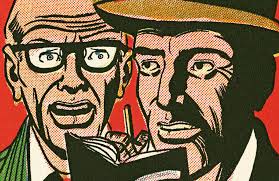 As with any sclerotic bureaucracy whose mission is lost to circumstances, America’s former Cold War espionage apparatus has grown sloppy. But using Western spies to fabricate political dirt crosses a big line.

The great fun will come next. John Brennan, James Comey, James Clapper, Andrew McCabe, Peter Strzok, and the rest thought they were kings in their world of make-believe, playing James Bond against the evil Trump.

Really, though, they were mailmen in ridiculous shorts, reliving past glories of the Sears Catalog day, while stuck hopelessly in a world of internet ordering and drone delivery.

A federal prosecutor is now asking questions. U.S. Attorney John Durham has Mifsud’s phones. This is going to get interesting, and soon.

ROBERT STEELE: For assclown read indictable convcitable traitor. It is not clear whether the conspiracy against our President originated among the elite in Great Britain or in Hillary “everyone is a Russian asset” Clinton’s mind or with John Brennan, rogue CIA analyst (he was never a clandestine case officer and made his bone as deputy to Buzzy Krongard in the Gold War against Russia that was wrapped up in 9/11 where Brennan appears to have been, along with George  Tenet, guilty of obstructing justice before, during, and after the false flag atrocity by the Zionists, as enabled by Dick Cheney and Donald Rumsfeld). This will all eventually include President Barack Obama personally, his national security advisor at the time Susan Rice (the lead in “unmasking” NSA intercepts that included opponents of the Obama regime), John P. Carlin (Assistant Attorney General for National Security from April 2014 to October 2016), and the known suspects at the FBI, James Comey, Andrew McCabe, Peter Strzok who covered up for Hillary Clinton at the same time that he spied on candidate Donald Trump), and Lisa Page, FBI lawyer intent on destroying candidate Trump.

My bet: Clinton and DNC started this, Great Britain and the MI-6 loved it, and Brennan carried water for Clinton, in violation of his oath of office. Everyone who accepted a known false shallow report from Christopher Steele is indictable.  Everyone who lied to the FISA court about qualifying evidence is indictable. Everyone who leaked and lied to the media against candidate Trump is indictable. Assange is being tortured and drugged in the UK in part to keep him from testifying against these miscreants. President Trump should demand Assange’s release and offer him healing and protection in the USA.

The time has come to  take down not only all US officers in the Executive who are in a state of treason — this includes all dual US-Israeli citizens — but also all Members of Congress including particularly Republicans who conspire with the Democrats to perpetuate the police state at home and endless war abroad.

Below is one overview, there are others.

William Binney: The Russians Did Not Hack the DNC or Anything Else!

Zero Hedge: Will McCabe Bring the FBI Down With Him? Will McCabe’s Indictment and the DoJ Memo Exonerate Mike Flynn?