This book brings together three monographs on grand strategy, global reality, and re-inventing the U.S. Army as well as the rest of the Department of Defense — and in passing addressing needed changes in diplomacy, development, and intelligence, all of which are just as broken as the military.

The U.S. military today is 50% waste, committing crimes against humanity in over 100 countries — alongside CIA drone assassination operations — and generally not able to win a war nor maintain a peace. Our generals and admirals are not being held accountable for telling the truth — they are themselves sadly divorced from reality and unable to appreciate the truth even when it is presented to them.

It is significant that this work was funded by the U.S. Army Strategic Studies Institute (SSI), paid for, and immediately censored. In a purge that reminds one of Stalinist air brushiing of those out of favor from photographs, everything the author ever wrote for SSI in the past twenty years has been purged from its website. Lacking today at SSI are three essential qualities needed by the US Army: intelligence, integrity, and imagination.

I am available to brief my findings and participate in a round table anywhere in the world. In the Washington DC area I am available at no cost to US Government hosts — contractors can make a reasonable donation to our non-profit. My email is robert.david.steele.vivas AT gmail DOT com. I can travel.

What should be noticed immediately are two things:

One Army —  Three Million Strong — No Contractors in Garrison or Field

Transformation is job and revenue neutral state by state, district by district.

I learned the hard way, watching Senator John Warner kill the National Security Act of 1002 that I helped Senator David Boren with, that we must EXPLICITLY include in any grand strategy a plan for transformation that is job and revenue neutral state by state and district by district.

At the end of the day, this beings our troops and their wallets and defense dollars HOME to local communities, rather than frittering them away on lazy disrespectful “allies” unwilling to bear their own defense burden, or on 50% profit margins for banks and corporations that cannot build a winning Army. It also creates a smart strong Army that can win wars, keep the post-war peace or prevent war, and restore the integrity of our youth and our communities.

Note: Below are the purged materials from SSI, all free online: 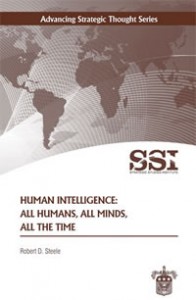 The author explores the centrality of Human Intelligence in meeting the needs of the U.S. Army, as well as the Department of Defense, and the whole of government, for relevant information and tailored intelligence essential to creating a national security strategy; for defining whole of government policies that work in harmony; for acquisition of the right capabilities at the right price in time to be useful; and for operations, both local and global. He outlines 15 distinct types of HUMINT, four of which are classified (defensive and offensive counterintelligence, clandestine operations, and covert action), with the other 11 being predominantly unclassified. The author offers the U.S. Army an orientation to a world in which thinkers displace shooters as the center of gravity for planning, programming, and budgeting, as well as the proper structuring of mission mandates, force structures, and tactics and techniques to be used in any given mission area. 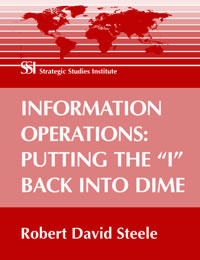 In the past year, Information Operations (IO) has matured from an early emphasis on the protection of critical infrastructures and against electronic espionage and is now more focused on content and on interagency information-sharing. The value of information–all information, not only secret information–and the value of global monitoring in all languages, 24/7, has been clearly established by the Undersecretary of Defense for Intelligence (USDI). This monograph defines and discusses three IO elements: Strategic Communication (the message); Open Source Intelligence (the reality); and, Joint Information Operations Centers (the technology). It concludes with a strategic overview of the various conceptual and technical elements required to meet modern IO needs, and provides a requirements statement that could be tailored to the needs of any Combatant Commander, service, or agency. 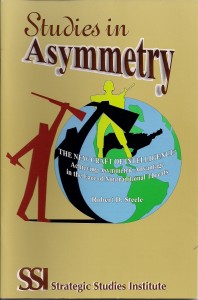 This monograph is the third in the Strategic Studies Institute’s “Studies in Asymmetry” Series. In it, the author examines two paradigm shifts–one in relation to the threat and a second in relation to intelligence methods– while offering a new model for threat analysis and a new model for intelligence operations in support to policy, acquisition, and command engaged in nontraditional asymmetric warfare. He concludes with an examination of the Revolution in Military Affairs and the need for a Revolution in Intelligence Affairs.