My research indicates that the Deep State took control of America starting on 26 July 1945. 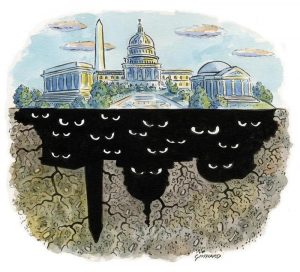 ROBERT STEELE: The Deep State actually took control of the USA on the 4th of July 1776 when Freemasons covertly replaced the overt British King as the masters of our future. The Deep State grew more complex when the Civil War was funded by the Rothschilds, and deepened in the 1920’s when the Rockefellers and Morgans, as surrogates for the Rothschilds, plotted to take over public transporation (to end it), public education (to dumb down the public), and the Great Depression in the 1930’s, to destroy the middle class  and buy up America at depression-era prices, while consolidating control of the federal government, which was complicit in the pre-planned Great Depression.

Having said that, I reiterate my admiration for Eric Zuesse, who is along with Sy Hersh and Bill Binney, one of the gold standard bearers for truth today.