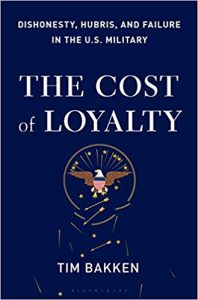 I finished the book and wrote the following:

The further I got into this book the more annoying I found the author, to the point that I would fire him rather than let him poison more young officers with his combination of grievances and ignorance.

This is a man who conflates conservatism with authoritarianism, and who cannot understand why the US Army would want its Superintendents to be themselves graduates of West Point.

He wants to be eligible for the top positions, considers most if not all of his military faculty counterparts to be underqualified, and is upset over the turnover (which I consider a feature — real world officers are rotated in and out of the faculty).

I went back over the book — being a voracious reader myself I have read and reviewed many of his sources, all of which are better than this book (particularly the US Army Strategic Studies Institute monograph, Lying to Ourselves: Dishonesty in the Army Profession, 2015).

Here is the book plan:

The author is delusional in suggesting that a civilian university is in any way better than a US military academy. The dishonesty as well as the perversion and the political virtue signaling and posturing across the academy is broader and deeper than any flaws to be found at any US military academy.

I discussed this book with one of my top three supervisors in decades past, a graduate of US Naval Academy Class of 1968, and with an Army Colonel with whom I shared clandestine operations training On balance we agree that the book is more of a grudge book than a solutions book, and, interestingly, that the Uniform Code of Military Justice is part of the problem, because it makes “truthfulness” a form of insubordination if the military superior decides that the “truthfulness” is “disrespectful” in any way.  I found that interesting because I do believe the US military — apart from being wasteful and badly managed — is also given too much latitude by the courts, and patriots serving in the military who wish to challenge misbehavior by their superiors have a very difficult time doing so.