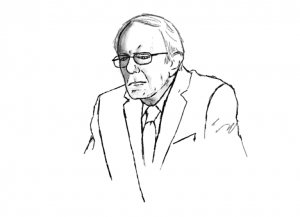 Bernie Sanders and the Socialism Question

Wherever Bernie Sanders’ campaign goes from here, the left critique of establishment politics is getting empirical backing through popular support for his candidacy.

ROBERT STEELE:  Rob Urie has writtten a brilliant analysis that despite its somewhat turgid language and its omissions, should be read with great care. If Sanders selects Kobuchar as his Vice President, announces #UNRIG as a platform element, names a coalition cabinet, and produces a balanced budget that starts with closing all US military bases overseas and  ending all foreign assistance to all dictators, he could beat President Donald Trump who has been blocked from receiving very specific suggestions not only from me, but from legitimate black leaders (as opposed to the black clowns he has around him now).  The 2020 election is Trump’s to lose, and the House is almost certain to be withing a few seats of returning to Republican control despite the large number of Republicans (or RINOs) retiring.

Neither President Trump nor candidate Sanders seem to grasp the fundamentals:

#UNRIG is not negotiable. Restore legitimacy to the electoral process by re-engaging the 70% now disenfranchised by the two-party tyranny that fronts for the Deep State, or be an illegitimate president in the eyes of many — it is not possible to have a legitimate balanced government and economy when both the banks and the government are licensed to lie, cheat, and steal.

Create an Open Source Agency that brings evidence-based governance back to every aspect of government, by integrating holistic analytics, true cost economics, and Open Source Everything Engineering (OSEE).

Form a true coalition cabinet as a gesture of good faith toward putting over 100 Independents, Greens, Libertarians, and #WalkAways into Congress in 2022, ending forever more the possibility of a single party controlling either the House or the Senate.

Produce a balanced budget that promises within four years to terminate the US military presence abroad; close down the police and surveillance state at home; cut the federal government by a third; reinstate state powers; localize the economy; and enforce the 1st, 2nd, and 4th Amendments of the Constitution.

Disclose 9/11, Epstein, the secret space program, and terminate all agents of a foreign power manipulating (bribing and blackmailing) Members  of Congress and state legislators as well as judges and prosecutors across America.

The greatest service Sanders can render America, before he drools himself to death, is to push Donald Trump into becoming a truly great President, a President for all of the people, not just the 13% controlled by the GOP and the additional 14% that can be drawn to him by varied means.

Cynthia McKinney and I will be using those words in the future. I beg of the President, use those words now.