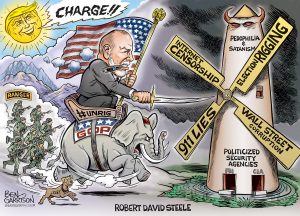 I have received both reinforcement (from intelligence colleagues) and push-back at two levels: a lower level of people who know almost nothing; and a higher level from people who do understand — as I understand — that the Shadowgate “alarm” is necessary but should focus attention on Israel and Great Britian as enemies of the USA using MI-6, the Mossad, the Red Mafiya, and the Anti-Defamation League (ADL), as “trusted agents” for anti-American censorship and information manipulation including pervasive interference in all matters of choice and vote.  Below are some email extracts.

From one of the top 12 information operations officers in the US forces:

Just finished watching the whole thing….had to shut it down a couple of times due the BS these two “operatives” were spouting.

IIA was in fact done, but the methodology was not quite what Tore alludes to. There was no deep dive into the community as she referenced for the Afghan election. First, as you well know, there is very little in the way of infrastructure in the rural areas of Afghanistan. How they influenced these people electronically is beyond me. Additionally, the election process was tightly controlled and we did not have to do anything suggested to ensure “our guy” won. We only needed to control the vote counting (which we did).

Overall, you are right about the MISTF-A but it was not completely screwed up, there was one area of which you were not exposed to that was very successful. The population stuff was a disaster and the cyber effort was also (since we did not have the authorities to operate we had to rely on third parties).

Agree that people do not understand any target at the lowest level, the local people on the ground. That was the issue that was the beginning of the end for Mike Flynn. Flynn wanted folks to be on the ground and in the communities. I did this in Viet Nam (not the Phoenix program but a MACV SOG effort in Khe Sahn area – look at Hickory Mission Support Site) and know that it works….but desk bound, scared of their shadow types will never acquiesce to such an effort if it puts their life in danger….

My first response to a well-intentioned Colonel who very intelligently asked about my context and intent.

The arrests for burglary and domestic violence had nothing to do with the film. There is nothing classified in the film, would you agree on that point?

CIA created the Artificial Intelligence Staff around me (I was a clandestine case officer sent in to kick IT ass into the future — I failed), I created MCIA for USMC, and served with MISTF-A. Bill Binney and Stephen E. Arnold are among my closest colleagues.

From where I sit the film is a Mossad op to take attention away from the fact that it is MI-6 and the Mossad that are doing all the bad stuff, not the USG per se. I have a fairly good understanding of the degree to which the Zionists and the Brits have penetrated everything.

Now I would be VERY interested in a paragraph from you that summarizes the video in the most positive terms possible and I will re-evaluate. From where I sit you have here two enlisted people with very narrow perspectives talking about a company with 24 employees and $4M in revenue. The two most useful points were on the leakage / sale of data to the private sector (mindful that NSA only processes 1% of its collected data) and the manipulation of jury pools. Nothing at all on mind-control, targeted individuals, 5G, Voice of God and death rays by DNA signature, nothing at all on Zionists and UK as the top enemies of the USA inside the gate.

I am delighted that you got in touch. I am certainly ready to re-evaluate. And to have the conversation with you as a video interview. Thank you for reaching out. Dog is going to take me for a walk now, your reply will have my absorbed attention when I get back to my home office.

My second response to a well-intentioned Colonel who ultimately agreed with my point: Shadowgate is a contrived production intended to focus atttention on “out of control” US Government employees when the real focus should be on Israel and Great Britain (the same people that did 9/11, Maxwell/ Epstein, and Russiagate as well as the fake pandemic known as COVID-19).

I think I have a pretty good grip on what the USG does — some of the chicken shit that US Army Reservists have been doing I find to be totally embarrassing as well as unprofessional — and of course we have everyone stalking their girlfriends, women they want to meet and so on.

As a clandestine case officer overseas, one of the first to chase terrorists full time, a bottle of scotch got me one day’s attention from the local OSO, fifteen solid hits, and then I was shut off because I was not a Priority 1 or 2. That’s when I learned NSA simply does not provide tactical support to clandestine operations overseas (or to Ambassadors and tactical commanders — as an S-1 Adjutant the first thing I did was shred all the SI/TK without wasting my Colonel’s time — nothing in there was remotely relevant to where our Battalion Landing Team was going) and later in life working with Tony Zinni and others I learned NSA does not do tactical counterintelligence for the FBI either — or the military CI folks — they just get to browse. Bill Binney has confirmed NSA does not process more than 1% of the information they collect (but it is all there for Tel Aviv and CIA and FBI to drill in for blackmail material as well as insider trading).

Am still interested in two sentences that sum up the movie from the best possible point of view on its value. I owe them that much and you are well positioned to do a very positive summary that I can throw into the pot. I am focused in the Zionists/Red Mafiya. They hired the FBI and Rudy Guliani, hand held by Michael Chertoff, to put the Italian mafia out of business so the Russian Red Mafiya that is the heart of Zionist power in the USA could take over. Les Wexner appears to have funded both 9/11 and Maxwell Epstein (and her daddy did PROMIS).  This is the “main enemy,” NOT China, Iran, or Russia.

So I don’t think Reservists dabbling with social media, or minor hacks (I opened Hackers on Planet Earth in 1994 and am a member of the Hackers Conference in Silicon Valley) make the grade for public concern. It is the Anti-Defamation League and the Mossad (and the Pilgrims and MI-6) that are controlling the social media platforms and the censorship, manipulation, as well as backdoors into most if not all US communications and computer systems. In that context I consider US Army and the good civilians at NSA to be in the 7th grade. Throw in mind-control from the Nazis at NASA and now you are getting close to the deep evil that needs to be purged. It does not help that we have a stupid population and corrupt academy that has lost the ability or inclination to teach history or civics or critical thinking.

Am interested in how you might — with or without attribution — cast the movie in the best possible light, there is a reason you reached out to me and I want to honor that.

Shortly I will post a video interview with Greg Halpern, who knows a great deal about Google as a manifestation of evil with the capabilities (controlled by Zionist Israel) described in Shadowgate.

Greg’s core point — complemented by YouTube’s taking down the Shadowgate video — was that I was playing into the Mossad’s game by trashing Shadowgate for the right reasons but with the wrong effect.  Greg has a point. Although I totally  recommended the movie (watch it at BitChute, link in original post below), I could have done a better job of highlighting the positive and pointing to the core fact that this was a disinformation operation intended to buffer the Zionists and Great Britain from what I believe to be the inevitable wrath of Donald J. Trump, President of the United States of America.