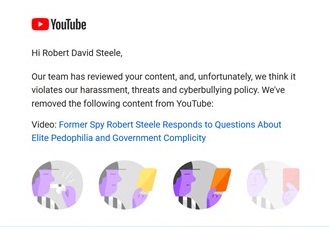 BOGUS.  The Deep State Globalists are freaking out.  They know POTUS has  them on both pedophilia (including child torture and murder) as well as 9/11 and $100 trillion stolen via naked short selling and $100 trillion in dirty money laundered — all of that illicit wealth is subject to civil and criminal forfeiture. I will be joining the class action lawsuit against YouTube by all the QAnons and conservative commentators, but perhaps more to the point, the creation of Web 3.0 took a giant leap forward this morning and will be central to President Trump’s second term.

BANNED VIDEO AS BACKED UP AT BITCHUTE: