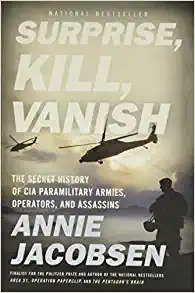 3 Star Not Worth Reading

In the past I might have given this book 4 stars despite its flaws, but my standards have  gone up (I demand holistic analytics and true cost economics now for 5 stars) and the author makes too many mistakes in areas where I have superior knowledge.

Also new is the disgrace of the New York Times as a fake news Deep State media outlet, and the fact that the Pulitzer Prize is not worth anything, it is a controlled prize like the Nobel Peace Prize, and is named after one of the pioneers of yellow journalism, manufacturing wars for profit with lies.

The book represents a great deal of work and for someone seeking background it might be worth a glance but the biggest flaw of this book is that it strongly appears to be a CIA financed love-in with no actual value for DoD or the newly-empower Special Operations community that now reports directly to SecDef.

My own deep reading as well as direct experience across both the spy world and the military world suggests that CIA is largely a clown show and that both CIA and SOF at scale fail badly — from rendition and torture to drone assassination with 98% kill rates  to blustering overweight buffoons trying to privatize, this is all very very bad stuff inimical to the public interest and undermining national security at multiple levels.

The elevation of SOF is long over-due but SOF is 60% or more dead meat right now, including all the people brought in directly from boot camp  that do not speak foreign languages and have their heads up their asses.  SOCOM has become a bureaucracy where you need to be a pre-approved courtier or extremely wealthy miliary-industrial complex magnate to get in to see the CINC. SOF has completely lost touch with White SOF — I continue to believe that MajGen Ferd Irizarry, USA (Ret) would be a great champion for White SOF that has been totally trashed by the hunter-killer bullshit that is now 90% collateral damage because CIA is incapable of distinguishing between bus boys and terrorists (the author does have multiple swipes.

False flags are not in this book, nor the ease with which the Mosssad and MI-6 manipulate CIA into doing stupid shit.

Here are a few lists of reviews I have done  that might yield a greater value:

Worth a Look: Book Reviews on Evil