On 4 March 2018 I broke the story on North Korea denuclearizing and the Koreas uniting. I was called a lunatic.  Two weeks later President Donald Trump confirmed the substance of my scoop.

Here is my next scoop: France is going to lose Savoy and Nice and the government will fall; Kosovo is going to rejoin Serbia; Russia is going to have full military access to the Villefranche port at Nice; and the European Union is going to break up (as will the Commonwealth of predatory Satanic pedophile ministers, but that is another story — get a head start at https://pedoempire.org).

Donald Trump, Vladimir Putin, and Xi Jinping are in agreement on all of this.

Here is the story, based on a long Skype with the Shadow Foreign Minister of France. 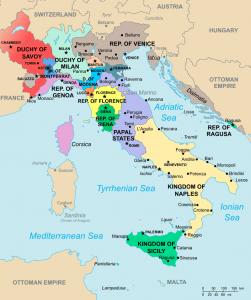 We started with a discussion of the story I reported on two days ago:

BREAKING: Cardinal’s Open Letter to President on Election Being About Good vs. Evil Posted to QPub, Evaluation by Robert David Steele [This Puts Pope and Vatican — 1 of 2 Synagogues of Satan — to Death]

Archbishop Carlo Maria Vigano is also the Titular Archbishop of Ulpania, which is contains Christian holy sites and  is in the middle of Kosovo, the minority Muslim portion of Serbia that I am told is certain to be reintegrated into Serbia, perhaps as an autonomous zone. In passing, the Zionist invented criminal state of Israel recently recognized Kosovo, which makes no sense at all unless Israel is looking for another base for its state-sponsored terrorism; this action by Israel appears to have energized great power approvals for Serbia’s reintegration — with peace and prosperity in the forefront — of Kosovo. I am told that Turkey has agreed to give up on Kosovo as an independent state, as part of a deal that includes the permanent demilitarization of Greek islands close to Turkey.

Ulpania was our jumping off point for discussing the future of Europe and of France. The trigger for the fall of France — and the break-up of the European Union — will be the Savoy case that is about to make the news. Savoy was a country in its own right, along with the principality of Nice, that was integrated into France as a colony against its will. The Paris Treaty of 1947 called for all parties to decolonize, and these articles (14, 44) apply to Savoy and Nice.

The legitimate heir Duke of Savoy is living and working in Russia. I am told that Putin, Trump, and Xi have all agreed that the time has come to break up the European Union, and the place to start is in France, using the Savoy case to fracture France, restore a legitimate government in France of the people, not the Satanic pedophiles now oppressing the people in the name of the Deep State and the Illuminati, and create a restored Savoy that has, in addition to the principality of Nice, a buffer zone donated by Italy to end its having a continguous border with France. Monacco could possibly extend east.

Perhaps far-fetched for many but not for me.  I mentioned the recent case where half of Oklahoma was ruled to still be an Indian reservation.

There is so much I do not know and do not understand. What I do know is that some people can be trusted and some people have knowledge that cannot be obtained via social media or signals collection, and I am talking to one of them.

I also understand historical forces and the power that truth and virtue offer.

The take-away from this conversation was for me three-fold:

01 Behind the scenes, unreported by the media or appreciated by the US public, President Donald Trump literally has his hands on every issue and appears to be standing on the right side of history in relation to every issue.

02 The Satanic pedophiles controlling Europe — both secular and royal — are being eliminated, and the European Union will be broken up.

03 Discussed at my initiative, not part of the Shadow Foreign Minister’s thinking, is the likely break-up of the Commonwealth now preyed upon by England — and also run by Satanic pedophile Prime Ministers on behalf of the City of London – the Rothschilds. Australia, Canada, Ireland, and Scotland will, in my view, be totally independent of England within the decade.

Before Strike 13 – more on that in a moment – President Donald Trump broke with the Deep State and its Zionist under-belly to make possible the forthcoming unification of the Koreas, with China accepting responsibility for no “loose nukes” and the US agreeing to withdraw its military forces from the south once unification is achieved. This is according to Princess Kaoru Nakamaru, Chair of the International Affairs Institute for World Peace and a royal family conduit to the North Korean leadership. [4]