ROBERT STEELE: I am personally opposed to satellite Internet dependency for four reasons:

01 Satellite performance is low compared to very high speed fiber, even in rural areas where a combination of fiber to churches and mesh within neighborhoods would be superior;

02 Satellites and their links are too easily interrupted or corrupted (data);

03 Satellites create radiation sickness — until we solve the problem of eliminating electromagnetic pollution and its adverse effects on humans as well as all other forms of life, we should have a moratorium on wireless; and

04 There is so much space junk up there now that a near-term disaster is certain — until we clean up near space, with or without stellar civilization help, any proposed satellite constellation is dubious at best.

Here is what a global fiber and free energy grid looks like per Buckminster Fuller.  I might add  that a super tunnel connecting Russia to Alaska, and a new federation integrating Canada and Mexico with Quebec and the First Nations in each are inevitable. My geographic priorities are also shown below. 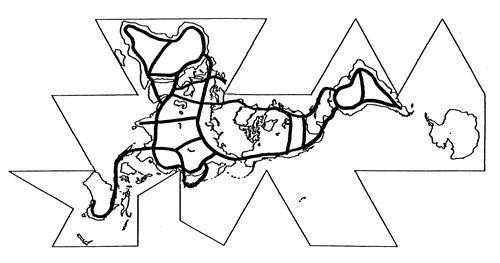