Two new books that articulate the foundation and the strategic framework for an authentically transpartisan movement-or-movements in America. 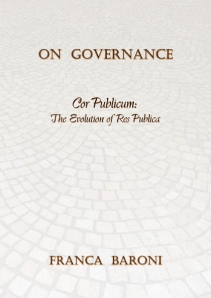 ON GOVERNANCE, Cor Publicum: The Evolution of Res Publica, by Dr. Franca Baroni

It is a pathway into the center of a radically new system of Law and governance.

It is best comprehended with the intelligence of the Heart.”

Dr. Franca Baroni holds a J.D. equivalent and a doctorate in law from the University of Basle, Switzerland, and a master’s in comparative law (L.L.M.) from the University of Miami. She is a member of the New York Bar since 1999 and a member of the Swiss Bar since 1997. She is a certified mediator with the Supreme Court of Florida and a meditation and awareness guide, not aligned with any particular tradition. She lives in Seattle, Washington. 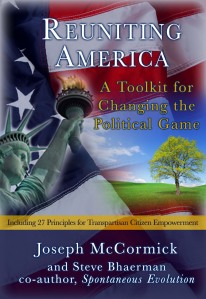 Reuniting America: A Toolkit for Changing the Political Game is a manifesto for a “grassroots upwising,” a transpartisan movement-of-movements. It is the story of the eight year journey of a serious citizen on a quest to discern the principles and practices for transforming the political game from win/lose to win/win. It weaves bold truth telling about power, control and the game of politics with the enlightened humor of a jester willing to point out “the Emperor has no clothes.” As old top-down ways of governing prove inadequate in the face of increasing complexity, it is intended to direct attention to the early signs of a new, cooperative form of political behavior emerging from the bottom-up (beginning with green-progressives working with “conservatarians” to localize economic and political decision-making.)