Below is a very important report that focuses primarily on Congress as a consumer of SECRET information.  The report has yet to be written on Congressional needs for decision-support (intelligence) that is unclassified and can be shared with constituents, the press, and the private sector being regulated and taxed.

Click on the Frog to see a one-page listing of Congressional committees and how they would benefit from an Open Source Agency (OSA) that included Congress via the Congressional Research Service (CRS) as a primary stake-holder and recipient of unclassified decision-support.  Conressional needs are also addressed by The Smart Nation Act: Public Intelligence in the Public Interest. 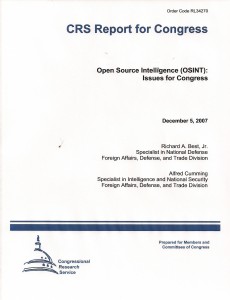 Click on the Frog to read a vitrolic angry critique by OSS CEO Robert Steele, possibly the last angry document closing out 20 years of blind opposition from the secret world.  This battle is OVER.  The good people of America have won.  Public intelligence in the public interest is here to stay, and we anticipate a growing demand to cut the secret intelligence budget in half so as to properly fund OSINT, education, and research essential to restoring the competitiveness of the USA.

Just behind Le Carre at the latter’s best (George Smiley)

This book is quite satisfying. It is not as good as John Le Carre at his best (the George Smiley series), but on balance, for an author that evidently lacks a professional background in intelligence, it filled time crossing the Atlantic and I could not ask for more.

A few highlights that struck me as worthy of a note:

The author does a good job of depicting the pain and discomfort of car surveillance, but completely misses the most important part: the stench of two human beings and assorted drinks and foods after 10 hours can be quite over-whelming.

He does a good job of pointing outthat historical repression is not forgotten and highly relevant to evaluationg today’s events.

He does a fine job of outlining how rogue counter-intelligence operaitons, unsanctioned murders of suspected terrorists, makes the perpetrators no better than those they seek to neutralize. I was among those who signed the letter to Senator John McCain against CIA’s practice of rendition and torture, CIA Director Mike Hayden’s second violation of the Constitution and his oath of office (the first was his warrantless wiretaps when Director of NSA, a decision since ruled illegal by the courts).

Thee author addresses the questions: how do you fight terror if out of control rogue elements adopt terror as their own tactic?

There are enough Spanish-language phrases to justify the tax write-off the author undoubtedly took for his travels to Spain.

I absolutely love his point toward the end, “the terrorists did not count on the government’s covering up.” This is what happened when President Kennedy was assassinated by a CIA-trained and CIA-equipped team of Cuban exiles who murdered our President for his “betrayal” at the Bay of Pigs.

He touches on how 20-30 families control Spain (this is generally true in many countries, in El Salvador they refer to the “14 families.”

Bottom line: decent and recommended. When the author absorbed more professional trade-craft and focuses more on the story line and less on the scattering of tax-deductible Spanish phrases, he just might exceed John Le Carre. I will watch for his future offerings, and plan to buy and read anything he writes in the future.

See also:
Smiley’s People
Tinker, Tailor, Soldier, Spy
The Spy Who Came in From the Cold
The Looking Glass War