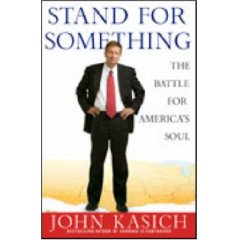 June 4, 2006
John Kasich
I certainly do not regret buying and taking the time to read this book. It is a relatively quick read (lots of white space between and around the lines). For me the best and most important chapter dealt with the corruption of politics, and I include some memorable quotes from there below.The books reads rather blandly and inoffensively (typical of Presidential Hopefuls writing “please get to know me” books but I have to say that after putting down this book, I felt that the author had indeed made his point: he is a decent man who stands for core values, and believes in a balanced budget to boot.Memorable points from the political chapter, alone worthy of buying and reading the book:

Reagan Republican who echoes President Carter’s “malaise” concerns by saying “there’s a feeling of hopelessness out there.”

p 21. “Good politics shouldn’t be about us or them”

On page 75, after starting off by saying that politics should be about saving the world, he says “We haven’t seen middle ground for so long I am no longer certain it exists.”

Both these comments tie in very well with the newly launched Unity08 movement to use the Internet to field a split party presidential team for 2008, and the new non-rival Citizens-Party (wing for each existing party to have “dual membership”) which will be launched shortly to field not just a mixed party presidential team, but a coalition cabinet committed to electoral issue as the non-rival issue for all, and a balanced transparent budget with public intelligence and dialog driving public policy in the future, instead of party line politics or special interest money (the author addresses both).

On page 77 he directly slams the Bush II administration is noting rather pointedly that we need leaders who represent our core values and are not simply committed to winning and holding power at any cost.

On page 94 he specifically identifies one of the times when Dick Cheney broke his word, and one gets the feeling that the author is intimately familiar with the propensity of the sitting Vice President to lie and break his word to one and all.

The books by Tom Coburn on Breach of Trust: How Washington Turns Outsiders Into Insiders and by Joe Klein on Politics Lost: From RFK to W: How Politicians Have Become Less Courageous and More Interested in Keeping Power than in Doing What’s Right for America as well as Norman Cousins on The Pathology of Power – A Challenge to Human Freedom and Safety are much more detailed and sophisticated than this book, but in his own way the author has told a simple elegant personal story about politics lost to party corruption and special interest money, and I respect him all the more for this chapter.

In comparison with the chapter on politics the chapters on sports, business lack of ethics, loss of religion to Paris Hilton and sex on TV, loss of discipline in education, and the loss of culture as celebrities fail to walk the wholesome road, are straight-forward.

The book ends with a general but rather bland “call to arms” asking each of us to believe in the greater good and act accordingly.

Bottom line: good guy, leader, “must have” on any coaltion ticket to save America from the Republican and Democratic extremists that are killing the Republic.