Cars are evil, right? But what if they ran on hydrogen, did 300 miles per gallon, were leased rather than owned, and were produced under an open source business model… 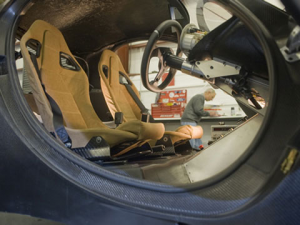 Riversimple’s network electric car is a hydrogen fuel cell powered car, with unique technologies that enable it to run on a 6kW fuel cell, with a fuel consumption equivalent to 300 miles per gallon and greenhouse gas emissions at 30g per km, well-to-wheel – less than a third of that from the most efficient petrol-engine cars currently available.

It also has the potential to be 10 times cleaner still if the hydrogen is produced from renewable energy.

Phi Beta Iota: “Open Everything” is not just a meme, it is the gameplan for the simple reason that open everything abolishes scarcity and makes it possible to create a prosperous world at peace.  Intelligence-driven peace and prosperity.  What a concept.

2009 Briefing: Open Everything at UNICEF in NYC