Invite your attention to attached — contains a couple of interesting observations about Open Source Intelligence (OSINT):

“…open source intelligence — catapulting it to primary place for new adversaries and increasingly for the U.S. military — and also rapid organizational learning and assembly of capabilities…”  [page 9]

“…There are strong indications that Hezbollah made significant use of OSINT — gathering valuable intelligence from Israeli press and news broadcasts as well as websites.  Reports suggest that Hezbollah used Israeli press reports to plot the location of its rocket strikes in Israel and may have used Google Earth to help re-calibrate the accuracy of its fire….”  [page 56] 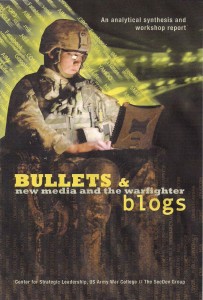 Phi Beta Iota: When Secretary of Defense Donald Rumsfeld heard that Al Qaeda “got it” on OSINT, his response was to close down all the DoD web sites, which merely inconvenienced Captains and Majors trying to learn.  Today we spend $75 billion a year on collecting secrets we cannot process or share, while wasting perhaps $2 billion a year across Whole of  Government on open sources, mostly in English, that we also do not process (while ignoring 99% of all we need to know that is in 183 langagues we do not speak).  A huge part of asymmetric warfare is about the mind-set of the respective opponents.  If the “high-tech brute” insists on being an uninformed brute, and the low-tech seer makes proper use of open sources and methods, the brute will lose every time.  We depicted this in the 1990’s. 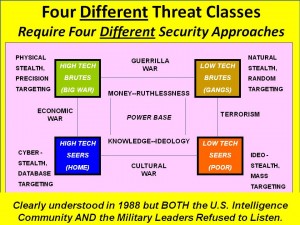 Search: QDR “four forces after next”

1993 From Schoolhouse to White House