On October 20, I caught Steven Johnson’s talk at Book People in Austin. I’ve known Steven since the 90s – we met when he was operating Feed Magazine, one of the early web content sites. After Feed, Steven created a second content site, actually more of a web forum, called Plastic.com.

Starting with Interface Culture, Steven has mostly written books, and is generally thought of as a science writer, though I think of him as a writer about culture as well. His book Emergence: The Connected Lives of Ants, Brains, Cities, and Software was a major influence for those of us who were into social software and the percolation of “Web 2.0.” I related it to my earlier “nodal politics” thinking, and it influenced the collaborative paper created by Joi Ito et al., called “Emergent Democracy.” Steven wrote an analysis of the Howard Dean Presidential Campaign for the book I edited with Mitch Ratcliffe, Extreme Democracy. 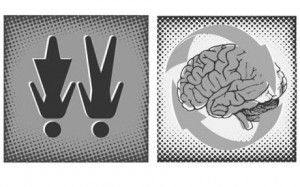 Daniel Pink has a smart article on flip thinking, a trend in innovation. It’s a matter of rethinking sequence logic: for instance, a math instructor finds that it makes more sense to work on problems in class, and follow with the lecture (uploaded to YouTube, where students watch as homework). You experience the tension of the problem first, and get hands-on guidance from the instructor. Having learned your way around the problem, you see the lecture that contextualizes that learning.

While the idea is great, and Pink offers excellent examples where turning sequences around might work, the more compelling lesson is about creativity: we should rethink our habits and routines, and consider re-engineering our processes, as a matter of course. It’s too easy for ruts to form. We avoid disruptive innovation because it can be painful, but it’s productive pain.