Test Was Designed by Psychologist Who Inspired CIA’s Torture Program 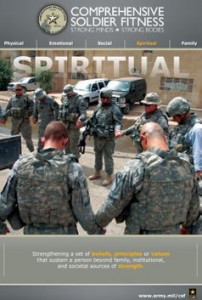 An experimental, Army mental-health, fitness initiative designed by the same psychologist whose work heavily influenced the psychological aspects of the Bush administration’s torture program is under fire by civil rights groups and hundreds of active-duty soldiers. They say it unconstitutionally requires enlistees to believe in God or a “higher power” in order to be deemed “spiritually fit” to serve in the Army.

Comprehensive Soldier Fitness (CSF) is a $125 million “holistic fitness program” unveiled in late 2009 and aimed at reducing the number of suicides and post-traumatic stress disorder (PTSD) cases, which have reached epidemic proportions over the past year due to multiple deployments to the wars in Iraq and Afghanistan and the substandard care soldiers have received when they return from combat.

Tomgram: William Astore, We’re Number One (in Self-Promotion)
Posted by William Astore at 9:40am, January 6, 201
EXTRACT:  In April 2010, for instance, a group of retired top brass and others released a report claiming that 27% of Americans between 17 and 24 are “too fat to fight.”  “Within just 10 years, the number of states reporting that 40 percent of their 18- to 24-year-olds are obese or overweight went from one [Kentucky] to 39.”  No reason to focus on that, though.  After all, it was so last year.

Just as the year ended, however, the Education Trust issued a report indicating that nearly a quarter of all applicants to the Armed Forces, despite having a high-school diploma, can’t pass the necessary military entrance exam.  This isn’t Rhodes Scholarships we’re talking about, but not having “the reading, mathematics, science, and problem-solving abilities” to become a bona fide private in the U.S. Army.  We’re talking the sort of basic that, according to an Education Trust spokesperson, makes it “equally likely that the men and women who don’t pass the test are [also] unprepared for the civilian workforce.”


Freedom Fighters for a Fading Empire
What It Means When We Say We Have the World’s Finest Fighting Force
By William J. Astore

EXTRACT:  As for our armed forces, though most Americans don’t know it, within U.S. military circles much criticism exists of an officer corps of “tarnished brass”that is deficient in professionalism; of generals who are more concerned withcovering their butts than leading from the front; of instruction at military academies that is divorced from war’s realities; of an aversion “to innovation or creativity… [leading to] an atmosphere of anti-intellectualism” that undermines strategy and makes a hash of counterinsurgency efforts.  Indeed, our military’s biting criticism of itself is one of the few positive signs in a fighting force that is otherwise overstretched, deeply frustrated, and ridiculously overpraised by genuflecting politicians.

William J. Astore, a retired lieutenant colonel (USAF) and professor of history, is a TomDispatch regular.  He welcomes reader comments atwjastore@gmail.com. To listen to Timothy MacBain’s latest TomCast audio interview in which Astore discusses the military nightmares of a fading empire, click here or, to download it to your iPod, here.