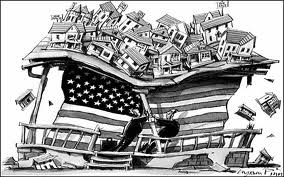 Story of 2011 Will Be The Second US Housing Crash

EXTRACT:  Many people claim Stoneleigh and I must be crazy, and doomers and all that, for predicting an 80%+ drop in real estate values, but we in turn can’t seem to understand why home prices would fall “only” 20% from here, or why they would fall “just” 40%, as Mish suggested for instance. We think that more than 20% is in the cards just because of the bubble coming back to earth; we think 40% is certain because of the bubble bursting, and we think 80%+ will then happen because the bursting bubble will take the entire financial system down with it. Pretty simple really.g, and it is worth reading….every single word of it.

EXTRACT:  According to L. Randall Wray, lenders may have the right to collect debt on certain loans, if they can prove ownership of the loan, but they can’t foreclose unless and until they have a clear record (chain) of all transactions the loans went through, through their entire existence. And MERS effectively killed that chain.

EXTRACT:  The entire US housing system, lenders, builders, borrowers, the whole thing, is in grave danger, and that means both the financial system and the economy at large are as well. We’re looking at not just one or two, but a whole series of reinforcing feedback loops. Which neither Obama nor Geithner nor Bernanke have any control over, other than fleetingly and temporarily.  And that will be the story of 2011.  Well, that and, of course, the euro crumbling, Japan deflating, China inflating, cities, counties and states defaulting, violent street protests, millions more Americans sinking into abject poverty, misery and hardship, and so on.

Phi Beta Iota: This is the best review we have found and it is chillingly credible.  In our view, the Secretary of the Treasury means well but has absolutely no clue how to actually manage the US economy back to a more stable ethical state.