Mixed feelings. Great idea — one that has been recommended for the five billion poor everywhere else in the world.

Troubling:  out of 300 million citizens, 100 million qualify for this specific form of poverty assistance? 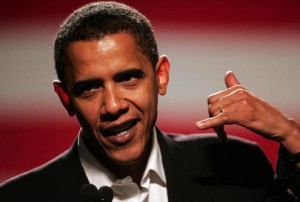 One of the complaints about the U.S. Constitution recently, being as outdated as it is, is that it fails to guarantee certain unalienable rights such as free medical care, housing , food, and of course, the right to bear cell phones. And, although the founders failed to specifically cite social programs as a necessary element for promoting the general welfare, the living nature of our founding document has been interpreted by political and legal scholars alike to allow for the seizure of assets by force from one group of people in order to redistribute those assets in a fair and responsible manner to those less fortunate.

As such, if you’re one of the 100 million Americans living below or at the edge of the poverty line, you’ll be happy to know that you more than likely qualify for a free cellular phone, also known as the Obama Phone, from the US government:

The Lifeline and Link Up programs are available to qualifying consumers in every state, territory, commonwealth, and on Tribal lands. Eligibility criteria vary by state. For states that rely solely on the federal Lifeline and Link Up program eligibility criteria, subscribers must either have an income that is at or below 135% of the federal Poverty Guidelines or participate in one of the following assistance programs:

The qualification requirements apply to roughly half of all American households, because according to recent statistics some 48.5% of Americans receive benefits from the government programs above.

According to a recent ruling by the FCC, the Lifeline and Link Up programs will now be expanded to provide wireless (and wireline broadband) coverage to more Americans than ever before:

The Lifeline-eligible population has increased significantly over the past decade. Since 1999, real median household income in the U.S. has declined by 7.1 percent, while households at the bottom of the income scale have seen their income decline by 12.1 percent.

In 2010, 46.2 million Americans were living in poverty, defined as living at or below the benchmark established in the FPG, compared to 31.6 million in 2000.

As household income has declined and more carriers have offered Lifeline-supported service, the program has
experienced significant growth. In the absence of today’s Order, which manages the size of the Fund in part by establishing a savings target, the program would provide an estimated $2.4 billion in support in 2012; that compares to an inflation-adjusted $582 million it provided in 1998 when five million subscribers participated in the program.

Over $2.4 billion in freshly printed dollars will be directed towards the program, which aims to connect tens of millions of poverty stricken Americans to the digital grid.

While we realize that some of those individuals, like those who cannot work for medical reasons for example, need access to phones in the event of an emergency, we can’t help but wonder how many millions of people like Duane Brooks, Jr. will be able to make calls, send text messages, and update their Facebook profiles instantly at the expense of others: