In the Philippines, turning plastic waste into fuel

Plastic waste is a problem all over the world. And it is especially troubling in the Philippines where plastic waste piles up in Manila’s Payal landfill, unable to decompose. But one inventor thinks he might have found the answer to this chronic problem. 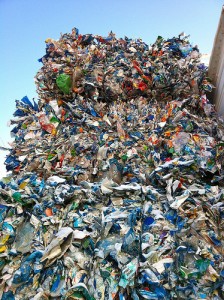 Jayme Navarro, founder of Poly-Green Technology and Resources is converting plastic waste into fuel through a process known as Pyrolysis.

ECO-Tech explains how it works:

“Pyrolysis is a fairly simple process, it starts by drying plastics to be processed. They are then shredded into smaller pieces, and heated in a thermal chamber. The melted plastic is continually heated until it boils and produce vapors. The vapor is passed into cooling pipes and distilled into a liquid, which is chemically identical to regular fuel.”

And one of the great benefits of converting plastic to fuel is that the fuel burns cleaner because of a low sulfur content. Navarro estimates that the fuel will be 10-20 percent cheaper because of the low production costs since the raw material is available in such large quantities.

The method has already been approved for industrial use and it is being tested for use in vehicles.

Reuters reporter Elly Park says: “While plastic fuel technology isn’t anything new, Navarro believes that an industrial scale version of his technology can not only help drivers on the road, but help the country dig itself out of its trash problem.”