A brief article Bring on the Drones! offers a wonderfully hopeful and positive view of open-sourced drone technology that will be available to the 99%.

Here’s the key take-away quote from it:

“Imagine, if you will, a world in which drones are cheap and widely available. Then stop and think about the target profile of the Empire and the corporate interests it serves. Imagine how easy it would be to get targeting information on the homes, churches and country clubs of the senior management and directors of the aerospace companies that make American drones. The Boardrooms and C-Suites themselves. The factories. The whole South Asian chain of command, from CINC CENTCOM down to battalion and flight headquarters. The logistical tail of the drones, including the control centers at every airbase from which drones are staged. Begin to get the picture? Even as it is, the current American advantage in drones is just an outlier in the general trend toward cheap area-denial technologies (carrier-killing Sunburn missiles, mines, etc.). In fact the panic in U.S. ruling circles is so extreme that the latest U.S. Defense Guidance document was centered on the need to prevent the United States losing its regional power projection capabilities to such technologies — the 21st century equivalent of the most powerful army in the world being defeated by a guerrilla army using punji sticks and a bicycle-borne logistical tail.” 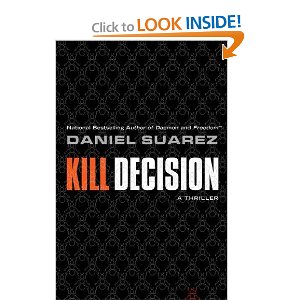 Targeting drones at the homes and country clubs of senior defense managers is similar to some plot elements of Daniel Suarez’s remarkable novel about drones, which is highly recommended novel, Kill Decision

But why stop at defense executives? Why not add to the list the bankers, lawyers, corrupt politicians, bad cops. Open source drone technology will become the great “equalizer,” just as handguns were in the 19th century wild west and many other more recent contexts:

Bring on the Drones! 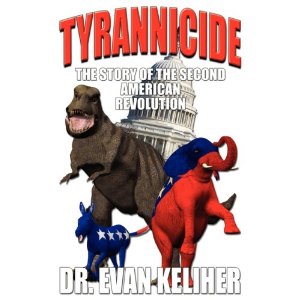 Phi Beta Iota:  The extreme elite seems to be oblivious to the ease with which an aroused public can start taking them down one corporate jet at a time, one Connecticut mansion at a time.  The corrupt in Washington are equally oblivious to the ever-rising chances that there will be a spontaneous uprising that kills many Senators and Representatives at home –the theme of a little-noticed novel, Tyrannicide: The Story of the Second American Revolution.  Occupy was the strongest possible signal that the Republic is stirring at its roots.  We anticipate a rash of “suicides” among those who have betrayed the public trust, “suicides” that will bear a remarkable resemblance to the “suicides” of patriots such as Col James Sabow, USCM (Aviation) who was murdered by Marines by order of the Commandant or Assistant Commandant of the Marine Corps, to protect Marine Corps support for CIA drug smuggling into the USA via El Toro Marine Corps Air Base in 1990.

Even more interesting — and our preferred path — would be a systemic citizen counter-intelligence corps that begins documenting and then outing elite pedophiles and elite criminals, one face at a time, with global reach.  Let there be no place on the planet they can go without being scorned by the public irrespective of language and cultural barriers.  Many good people have made the “unsavory compromise” of being polite to these reptilian amoral beings in return for earnings.  The day may be coming when elites with amoral predelictions are hunted down and burned the way witches once were.