The details are being read in Europe.

Promises of millions, a new face and detailed instructions on a double-agent conspiracy in Moscow. Bearing the hallmarks of a Cold War spy thriller, Russia’s counterintelligence agency says it nabbed a CIA officer trying to flip a Russian operative.

The Federal Security Service (FSB) Public Relations Center has announced that the person detained is Ryan Christopher Fogle, a career diplomat working as the third secretary of the Political Section of the American embassy in Moscow. 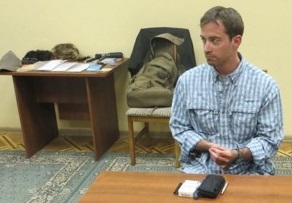 The agency stressed that Christopher had special technical equipment, printed instructions for the Russian citizen being recruited, a large sum of money and means to change the person’s appearance.

The detainee was delivered to the FSB receiving office where he has been questioned and after all the necessary procedures he has been handed over to representatives of the US embassy in Moscow.

The website of the American embassy in Russia informs that its Political Section is engaged in “bringing to the attention of the Russian government the US position on the issues of foreign policy and security.” The section’s other task is to “inform Washington about the main provisions of the foreign and defense policy of Russia,” as well as Russian domestic political life.

Read full article with videos, photos, and a translation of the CIA’s Google mail instructions and payment plan.

Ryan Fogle Detained By Russia, Accused Of Spying For C.I.A.

“If this is genuine, then it’ll be seen to be appallingly bad tradecraft – being caught with a `How-to-be-a-Spy 101′ guide and a wig. He would have had to have been pretty stupid,” said Mark Galeotti, a professor at New York University who studies the Russian security services.

U.S. officials did not dispute that Fogle was a CIA employee, and they sought to play down the potential for any diplomatic fallout.

Public records indicate that Fogle is a native of Missouri and a graduate of Colgate University in New York. A woman who answered the phone at his parents’ residence in St. Louis declined to comment.

Phi Beta Iota:  Based on the latest information, that this was a cold pitch to an official liaison contact associated with an on-going joint case related to the Boston Bombing and the Caucasus, the insanity simply deepens.  Given how little CIA knows about individual Russians, even those with whom US officials have daily contact, this is just too outlandish and calls into question the judgment of every CIA officer in the chain of command — perhaps the CIA training program should drop its idiotic “working with bodyguards” classes, and focus instead on “Moscow Rules” (which are also Beijing and New Delhi Rules).  Of course we have considered that this might be a Russian provocation taking out a hapless Third Secretary, but the entire construct is too stupid to have been constructed by the Russians, only Americans screw up this badly….arrogant and ignorant Americans out of touch with reality.

Phi Beta Iota:  Although the bioweapon allegations to assassinate Obama are from Sorcha Fall (David Booth), a known disinformation agent, the account of the alleged CIA officers movements, and his association with Benghazi, are — if true — stunning indictments of the CIA’s continued lack of intelligence with integrity.  To send an officer from Moscow to Benghazi and not think the Russians would notice is extreme idiocy.  Judging by what little is in open sources, the officer — and his chain of command — do not appear to have been operating under “Moscow Rules” and this was either a Russian dangle under control the whole time, or a bungled break-out by the officer from his known surveillance grid.  What is fascinating is the evident willingness of the CIA to put its Google contact process in writing (not even remotely secure if anyone is watching) and the money scale.  Imagine how much Open Source Intelligence (OSINT) could be bought for that amount of money — not by the CIA’s Open Source Center (OSC) which has no idea what it is doing, but rather by a true multinational decision support center that blends FIND, GET, BUY before ever tasking a clandestine collection mechanism.  CIA is in the stone age (along with NSA, NGA, NRO, and DIA — all in desperate need of a complete make-over, severe scaling back, and taking a back seat to a national Open Source Agency (OSA) that validates all requirements for clandestine collection).  We can do better on Chinese submarines with Russian nuclear using OSINT, than CIA will ever do….but neither the Navy nor the CIA appears willing to face that reality.  The plain fact is that CIA is not in the intelligence business, it is in the drone and human waste business.  Nothing the Aspin Brown Commission recommended — indeed nothing in a wealth of books by intelligence reformers in the past 20 years — has been acted upon.  The DNI appears to have made it much worse, creating layers of staff without authority, while not actually doing anything at all to improve the provision of intelligence (decision-support) for the President (who could care less) or the rest of the Cabinet (ditto).  A sad story — the story of US intelligence in one snapshot.

Way of the Truth