This is dangerous territory. When two thirds of the people in a democracy are dissatisfied with the government but feel unable to change it, social unrest arises.

Though issues such as terrorism, healthcare, race relations and immigration have emerged among the top problems in recent polls, government, the economy and unemployment have been the dominant problems listed by Americans for more than a year.

Phi Beta Iota: Further attacks — and particularly lethal ambushes against individual or isolated pairs of police — are certain. The persistent lies about the actual unemployment rate set the stage for the government being “surprised” when the 33% of its citizens that are very angry at not having adequate work with dignity and benefits combine with the 69% that are very unhappy overall (overlap already exists). All that is missing for a wave of attacks on the police is a combination of a precipitant with a social media “flash fire” that sparks a media frenzy the government cannot control (right now the government influences how CNN and others including Fox report any incident the government cares about). Members of Congress who  return home for the summer recess without having accomplished anything of significance as a body — legislation written by lobbyists and voted on without being read, that favors the 42 billionaires now “owning” the two-party tyranny does not count — may be subject to individual attacks in many forms including lethal. This is a very precarious situation for the government to face. Absent a non-violent constructive movement to achieve electoral reform in 2015 and elect an Independent president and a percentage of Independent and small party candidates committed to the truth at any cost, 2016 is likely to see a shift with violence away from a passive “pox on both parties” toward an active lashing out against all forms of authority starting with cops in uniform who are sitting ducks once a majority turns its back on them. It is hypocritical and downright stupid for the White House to roll out its “punk” and “no excuse” commentary. The US Government is perceived by a majority to be a captive of the 1% and working against the 99%.  As the CEO of Saatchi and Saatchi likes to say, “Until you get the truth on the table, no matter how ugly it is, you are not in a position to deal with it.” Truth comes before reconcilation. Integrity comes before truth. The US Government lacks integrity, denies the truth, and is far removed at this time and in its current mind-set from any hope of reconciling with the public.

John Steiner: Mark Bittman in NYT – Is It Bad Enough Yet? 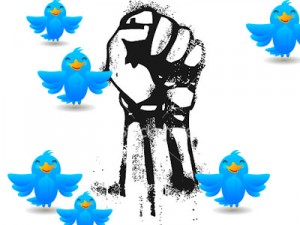 Review: Violent Politics — A History of Insurgency, Terrorism, and Guerrilla War, from the American Revolution to Iraq