Further to the Phi Beta Iota comments on the mistaken limitation of OSINT to passive monitoring of web sites and such….

“A lack of research based on primary sources has been one of the major impediments to progress in the field of (counter-) terrorism studies… As numerous leading experts have warned, the consequences of an overreliance on secondary sources of information, such as newspapers, has led to a great amount of theorising based on a perilously small empirical foundation.”


The Astonishingly Crap Science of ‘Counter-Extremism’

A new United Nations report published this February has criticised prevalent approaches to countering ‘radicalisation’ as ineffective, conceptually flawed, and more likely to reinforce extremist narratives than prevent them.

Despite volumes of research and huge expenditures, he points out, “there are no authoritative statistical data on the pathways towards individual radicalisation.”

To make matters worse, Emmerson concludes, “States have tended to focus on those [approaches] that are most appealing to them, shying away from the more complex issues, including political issues such as foreign policy and transnational conflicts.” This has led to a misguided “focus on religious ideology as the driver of terrorism and extremism”, and an escalating resort to repressive and discriminatory measures targeted at Muslim communities.

Far from preventing extremism, this is fuelling it. 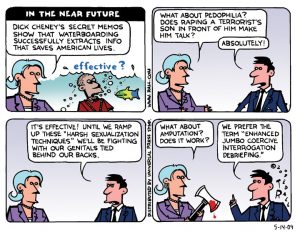 “Despite over a decade of government funding and thousands of newcomers to the field of terrorist research, we are no closer to answering the simple question of ‘What leads a person to turn to political violence?’” he lamented.

He blamed this “state of stagnation” on government funding of academic research while still withholding access to sensitive primary source information guarded by the intelligence community:

“This has led to an explosion of speculations with little empirical grounding in academia, which has the methodological skills but lacks data for a major breakthrough… Nor has the intelligence community been able to achieve any breakthrough because of the structure and dynamic of this community and its lack of methodological rigor. This prevents creative analysis of terrorism protected from political concerns.”

Yet according to NBC News, more than a quarter of the final [now-discredited 9/11 Commission] report’s footnotes refer to interrogations of detainees acquired by torture, including three alleged senior al-Qaeda leaders who were repeatedly waterboarded.

As Philip Shenon observed in Newsweek:

“This has troubling implications for the credibility of the commission’s final report. In intelligence circles, testimony obtained through torture is typically discredited; research shows that people will say anything under threat of intense physical pain.”

The US government went on to concede that Zubaida was not involved in any other previous terrorist attacks, was not actually a member of al-Qaeda, and was not even a member of the Taliban.

You won’t hear government spokespersons admitting this in any formal capacity — but internal assessments and reviews tend to show that privately, the bankruptcy of existing CVE programmes is widely, if reluctantly, recognised. 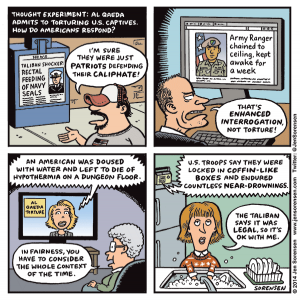 One of the most comprehensive reviews of the state of the research on countering extremism was undertaken last year by the National Consortium for the Study of Terrorism and Responses to Terrorism (START) at the University of Maryland. The review was commissioned by the US Department of Homeland Security (DHS) and the US Department of Defense’s (DoD) Strategic Multilayer Assessment (SMA) office, and the resulting document reported straight back to those departments.

The report’s findings are disturbing.

“Most literature addressing counter‐terrorism, counter‐insurgency, and/or countering violent extremism does not include empirical evaluations of specific policies,” it concluded.

In 2011, a study by the London School of Economics and University of Essex, published in the Journal of Peace Research, examined terrorist attacks on Americans by foreigners between 1978 and 2005.

Their model showed that US military support to foreign governments had “substantively strong effects on foreign terror on Americans.” A significant rise in military aid, for instance, produced an increase in anti-American terrorism by 135%.

In her seminal 2009 Routledge study, State Terrorism and Neoliberalism: The North in the South, Professor Ruth Blakeley, Head of the School of Politics and International Relations at the University of Kent, provided a further wealth of evidence on the vast extent to which Western states perpetrated terrorism during and after the Cold War. The death toll of this continuum of terror far outweighs the scale of atrocities by al-Qaeda and ISIS.

ROBERT STEELE: As some know, I have devoted a quarter century to intelligence reform centered on leveraging open sources of information (“do not send a spy where a schoolboy can go”); creating a proper holistic analytic model that reflects true cost economics (as well as calling for an all-source workstation that can be shared outside the wire); and demanding integrity of intelligence while extending the craft of intelligence into every domain, since we have known for a very long time being totally imperial and dishonest in our foreign policy both bankrupts our domestic economy and creates tens of millions of terrorists, insurgents, and displaced persons (many of whom become illegal immigrants). The dishonesty of the intelligence profession today is incomprehensible to me — it can only be understood if one grasps what William Binney has said: the intelligence community is a  spending process, nothing more. It exists to keep the problems alive so the money can keep moving toward the military-industrial complex that has bankrupted the Republic, that consumes 60% of the disposable federal budget, 16% of the total budget, over a third of that budget borrowed and over half of what that budget buys documented waste.The major change to my own thinking in the past quarter century is my recognition that counterintelligence is “root.” Until we clean house of traitors and incompetents, intelligence will be nothing more than a spending cesspool that disgraces the Republic. At what point do we acknowledge that our own dishonesty is the greatest threat to the security and prosperity of the United States of America? I pray that before I die we can resurrect intelligence with integrity in this country. We can start by acknowledging that OSINT is HUMINT not TECHINT; that eleven of the fifteen slices of HUMINT are overt not covert; and that CIA is a dysfunctional corrupt enterprise incapable of doing clandestine HUMINT, with absolutely no legal or moral authority over how the rest of us do OSINT. Active OSINT — OSINT Done Right — is back.