Phi Beta Iota: #UNRIG is about uniting the 99% against the 1% with ethical non-violent demands for restoring integrity to Congress — it is diametrically opposite to the Deep State / Soros / Zionist-AIPAC agenda for divide & conquer with fake race and gender wars, lies, and the promotion of fear that promotes war abroad and at home. It is within the power of our President to lead #UNRIG, create a 60% or better mass movement (not a party) that helps him be the greatest president ever, making America great again. This is real simple.  Israel & Wall Street First? Or America & Main Street First? #UNRIG!

All donors receive a Founding Citizen Certificate, two options are shown below. 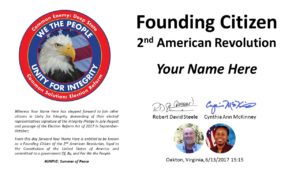 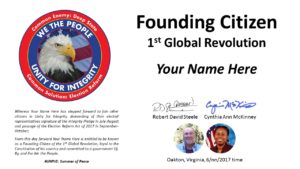