On Thursday, the subreddit r/911truth was placed under a Reddit Quarantine. The Reddit Administrators claimed that the subreddit posts misinformation and then directed people seeking information on 9/11 to the official government website. 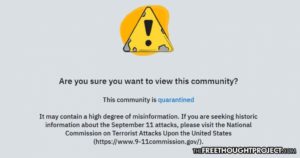 In other news, Google-owned BlogSpot.com wiped out Dr. James Fetzer’s website without cause and without due process — they should be part of the class action lawsuit.  Fetzer is back up at http://jamesfetzer.org/. Because of government inaction, all of us are being forced to spend thousands of dollars creating hot back-ups and cutting Google, VaultPress (WordPress) and other untrustworthy elements out of the equation.

Phi Beta Iota: Reddit has zero credibility. It is part of #GoogleGestapo and should be replaced.