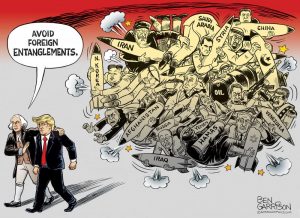 ROBERT STEELE: As onerous and expensive are the foreign entanglements, all based on lies and all a profit center for the 1%, they pale in comparison to the cost to the 99% of Zionist control of the US economy, government, and society. It is our mission as a people to restore the integrity of our Republic by eradicating the Zionist pest and installing a legitimate government that is not an agent of a foreign power. To this end we must each pledge to each other our Lives, our Fortunes, and our Sacred Honor. #UNRIG (election reform) and a truth channel inclusive of revisionist history (via an Open Source Agency that does holistic analytics and true cost economics while building an uncensorable unmanipulable Web 3.0) is how we do this.

CENSORED BY GOOGLE NEWS: Robert Steele: Is Ilhan Omar Cynthia McKinney 2.0? – Will the Zionist Parasite Be Purged from the USA This Time?