Matthew Whitaker, a former U.S. attorney who served as a Trump’s acting attorney general between Jeff Sessions and William Barr, claimed in a new book that Holder “created an above-the-law culture” in the department that led to the bumbled investigations that the president has dubbed “Obamagate.” 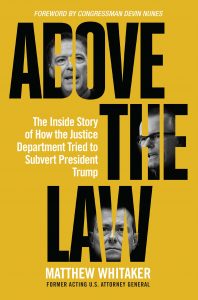 The Department of Justice had been steered off course by a Deep State made up of Washington insiders who saw themselves as above the law. Recklessly inverting, bending, and breaking the law to achieve their own political goals, they relentlessly undermined the Constitution by flaunting the rightful authority of a President they despised.

Whitaker was an outsider with a desire to see justice done and democracy work. In his straightforward new book, Above the Law, he provides a stunning account of what he found in the swamp that is Washington. Whitaker reveals:

• How the Deep State—drawing on elite universities and corporate law firms—perpetuates itself, keeping a small clique of people in power to ensure that nothing ever changes

If you had any doubts that the Deep State actually exists, that it perpetuates a government of insiders, and that it inexorably pursues a political agenda of its own, then you will find Whitaker’s first-person account eye-opening and utterly convincing.

Visit Amazon Page for the Book.