The “cancel culture” is a Deep State / Zionist play to eradicate history and make everything about the fractured present.  This was explicitly forecast in George Orwell’s book 1984. What the UK, US, **and the Arab dictatorships** have allowed to happen to Palestine is a crime against humanity and the single greatest obstacle to peace and prosperity for all. It is now a felony in 28 states to call for the Boycott, Disvestment, and Sanctions (BSA) of Israel — state legislators and the Governors have been bribed and blackmailed (many with Mossad pedophilia entrapment videos), 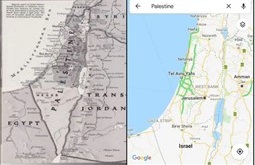 Zionism is not Judaism. Devout Jews and their rabbis all reject the criminal apartheid genocidal invented state of Israel. The time has come to eradicate the Zionist parasite from the USA; to put down the “cancel culture” of the Deep State and its Zionist under-belly, and to restore intelligence with integrity to every aspect of our economy, government, and society — all undermined by Zionist and Deep State subversion and including such notable recent atrocities as 9/11 and the Ghislaine Maxwell – Jeffrey Epstein – Lex Wexner pedophilia entrapment and nuclear / intelligence property / insider trading espionage network of which another 49 similar networks remain across the remaining 49 states of the USA.

Below is a real map depicting real history. Palestine is in some ways the beating heart of history and ethnic integrity.

ENOUGH Already. Every American patriot must first commit to America First, not Israel First; then demand #UNRIG Electoral Reform Act such that Congress and then all state legislatures are freed from Zionist and Deep State bribery and blackmail; and finally, demand that the USA both close all bases overseas and support the Palestinian expulsion of the criminal invented Zionist state of Israel (not the Jews who should be free to remain in peace and prosperity).

This is a counterintelligence matter.  This is a matter of moral and intellectual integrity. Absent this correction, the USA is destined for its own eradication.

Amazing Polly: The Zionist Theft of Technology from Russia, the USA, and China — Maxwell & Epstein & the Deep State’s Desire to Enslave Humanity with Predatory Technology

Robert Steele: Breaking the Silence Against the Zionist Criminal State’s Occupation of the USA and Palestine