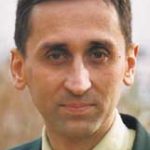 It is not known what weapon was used. However, it has already been tested in Syria since January 2020. It is a missile with a tactical nuclear component in its warhead that causes a smoke mushroom characteristic of nuclear weapons.  Read full article.

FALSE FLAG OPERATION: Beirut Targeted By Devastating 9/11-Level Terrorist Attack—Who did it and Why?

UPDATE 1: Netanyahu Speech at UN in 2018 with Three Locations

In Lebanon, Iran is directing Hezbollah to build secret sites to convert inaccurate projectiles into precision-guided missiles. Missiles that can target deep inside Israel within an accuracy of ten meters. Hezbollah, listen to this, Hezbollah is deliberately using the innocent people of Beirut as human shields. They’ve placed three of these missile conversion sites along Beirut’s international airport. Here’s a picture that’s worth a thousand missiles. Here’s Beirut’s international airport. Here’s the first missile site. It’s in the Uzai neighborhood, on the water;s edge, a few blocks away from the runway. Here’s the second site. It’s underneath a soccer stadium, two blocks away. And here’s the third site. It’s adjacent to the airport itself, right next to it. So I have a message for Hezbollah today: Israel knows, Israel also knows what you’re doing. Israel knows where you’re doing it. And Israel will not let you get away with it.

UPDATE 2:  Israel Is in Shock, in a Sickening Show of Hypocrisy

How much more obvious and clearer can it get, when Jewish journalists themselves accuse Israel of the Beirut attack, on the base of solid evidence? Here is a dispassionate article from Gideon Levy, openly opposed to Israel long-held policies of destruction of the Middle-East, and his expressed and thorough disgust and repulsion for Israel’s insulting crocodile tears and ensuing offers to “help” Lebanon.

This would make a good update #2 as it comes from a Jewish man living and writing in Israel.  Many people don’t realize that there exists a true and vocal opposition to Israel from within the country.

Ha’aretz: Israel Is in Shock, in a Sickening Show of Hypocrisy

When Kissinger states that “Israel will no longer exist after 2022”, it may very well be that Israel has outlast its shelf life as a tool, for what Deep State is concerned, and has become too much of a dangerous and loose cannon even for the NWO.  In which case it will suffer the same fate as Beirut and Palestine.

Jewish girl speaks out after being bullied and cast out by her community because she is not a zionist and doesn't support racist state of Israel.

UPDATE 3: Proof of Missiles into Beirut