Congressional critics have singled out the Office of the Director of National Intelligence (DNI) and the National Counterterrorism Center (NCTC), established as part of a sweeping intelligence overhaul after the September 11 attacks.

“I do not (have), nor do I believe the DNI as currently constructed has, all of the authorities to move all of the information in a way that will maximize the likelihood of detecting these plots,” NCTC Director Michael Leiter told the House of Representatives Homeland Security Committee.

Phi Beta Iota: Of course the DNI does not have the authorities he needs.  That’s the plan.  If intelligence were as effective as it is capable of being, we could cut the budget back to $25 billion or so, and redirect the savings to education and research, ultimately creating a Smart Nation and a World Brain.  See the last item, Fact Check: How State of Union Compares With Reality, and our comment there.

After Van Jones, Anita Dunn, the Skip Gates mess, the “tea-bagger” slurs, the attacks on Fox News, the Copenhagen dashes, the bowing, the apologizing, the reordering of creditors, the NEA obsequiousness, the lackluster overseas-contingency-operation front, the deer-in-the-headlights pause on Afghanistan, the pseudo-deadlines on Iran, Guantanamo, and healthcare, the transparency and bipartisanship fraud, and dozens of other things, Obama simply does not have the popularity to carry unpopular legislation forward. Indeed, he is reaching a point where he may poll more negatively than his agenda does. “Let me be perfectly clear” and “make no mistake about it” are now caricatures.

Phi Beta Iota: We are not in favor of bashing the President.  This paragraph is a tiny manifestation of the enormous anger across America as the 30% of the voters that elected Obama join with the 70% of the voters that did not vote for him (half of those did not vote at all) to realize that Dick Cheney was not the end of the line, Obama is.  The two-party system is not working.  It is not representative, it remains corrupt.  We coiuld free Obama, but like the lightbulb in the shrink joke, he has to want to be free.  Obama could be the George Washington of the 21st Century if he would pass Electoral Reform and lead the entire Nation

Cut The Pentagon, Too: Why Obama’s spending freeze should apply to (most of) the military

Like the budgets of all bureaucracies, but much more so, the Pentagon is stuffed with entrenched interests, parochial barons, and internecine rivalries.

There is no good reason to exempt the Pentagon’s budget from this discipline.  Of course, there are plenty of good reasons to exempt parts of the defense budget from a strict spending freeze. 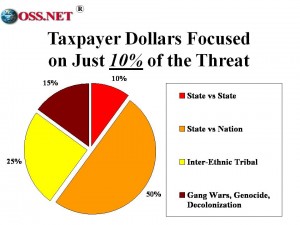 Phi Beta Iota: A major reason why we included Inspector-Generals and Operational Test & Evaluation in Full-Spectrum Human Intelligence is because Counter-Intelligence needs to be expanded to include what Sherman Kent called “reasonable dishonesty.”  Pentagon acquisition managers KNOW the taxpayer is being cheated.  Contractors KNOW they are cheating the government–however, in fairness to the contractors (Dr. Joe Markowitz pointed this out forcefully one day) they do what we tell them to do and they do what we let them get away with.  This is on us, the government, alone.  It’s time to stop all of that (over a five year period, 20% at a time).   When we cross-walked the Pentagon budget against reality, we found that it is marginally optimized against 10% of the need.  Reform can be job and revenue neutral from company to company and Congressional district to Congressional district, it just needs an honest intelligence baseline and policy and acquisiton leadership required by the Secretary to respect reality. Robert Steele seeks work, has integrity, and knows how to fix this. Any questions?

Included in the Obama administration’s latest arms package for Taiwan will be authorization for a joint U.S.-Taiwan feasibility study on bolstering airpower against the threats to the island posed by Chinese missiles and aircraft, according to U.S. officials.

Phi Beta Iota: This is about as ill-advised as missile defense against the Russians.  Taiwan is part of One China, we need to stop wasting taxpayer money on military assistance to dictators and war-wongers, and focus instead of re-directing the same funds and same contractors toward waging peace in Africa and Latin America–leave Central Asia to Russia and China.  The US has no strategy, no global intelligence “big picture,” and therefore no means for questioning the insanity of a good 75% of how we spend money.

The military strategy in Afghanistan is seriously flawed and is doomed to failure without major adjustments, the outgoing head of the UN there has warned. Kai Eide, who will stand down as UN Special Representative in March, was withering in his assessment of the Afghan surge recently set in motion by President Obama. He warned that the military focus was at the expense of a “meaningful, Afghan-led political strategy” and that Western troops and governments had left Afghans feeling that they faced “cultural invasion”.

Phi Beta Iota: First off, we don’t have a strategy for Afghanistan or the region, and we do not have a good grip on reality at multiple levels including water, ethnicity, Indian and Israeli incursions, Chinese and Russian concerns, and so on–all easily done with defense open source capabilities properly managed.   DoD needs to start treating Open Source Intelligence (OSINT) as the policy, acquisition, and operational arm itt can be, not as a dribble of document exploitation and human terrain fourth-stringers that it is now.

A Veteran Intelligence Operative On The Great American Interrogation Disaster

When retired Army Col. Stuart Herrington talks about intelligence, and especially about interrogation issues, I listen. His time in Vietnam was captured well in his book Silence was a Weapon also published under the title Stalking the Vietcong. He ran a secret interrogation operation on an island off the coast of Panama after the invasion of Panama, where, he says, much was learned about Noriega’s relations with Cuba and the PLO. He ran a similar secret operation after the 1991 Gulf War. In 2004, he was asked to look into U.S. intelligence operations in Iraq and produced a scathing report that, to my knowledge, has never been released.  To my knowledge, he was one of the first people to blow the whistle on Abu Ghraib and on the broader abuse of prisoners that was occurring in many locations in Iraq back then.

“There was no room on our team for charlatans who believed in sleep deprivation, inducing hypothermia, stress positions, face slapping, forced nudity, water boarding, blaring heavy metal music, or other amateurish, ineffective and ethically flawed tricks.”

Phi Beta Iota: Col Herrington tried and failed to improve intelligence instruction at the Army War College, just as we did at the Marine Corps University–every generation of captains seems to separate into the company men who stay and the “can’t believe we do this” independent spirits that leave.  BGen McMaster is a hybrid.  We signed the letter against torture to Senator John McCain (R-AZ) but it appears to have done no good–neither CIA nor DoD “joint” torture teams appear to have listened.

Fact Check: How State of Union Compares With Reality

WASHINGTON — President Obama, who once considered government spending freezes a hatchet job, told Americans on Wednesday it’s now part of his solution to the exploding deficit. He didn’t explain what had changed.His State of the Union speech skipped over a variety of complex realities in laying out a “common-sense” call to action.  A look at some of his claims and how they compare with the facts:

Phi Beta Iota: A President is only as good as his intelligence (decision-support).  The “intelligence” reaching the President STINKS at multiple levels.  It can be fixed, but only if the Vice President and the National Security Advisor get a grip on the art of the possible, and then demand coherent decision-support, not only for the President, but for every Cabinet leader, for every agency, division, bureau, for every action officer.  To spend $75 billion a year and not be able to do this is understandable (ignorance) but inexcusable (there are those that know how to do the right things righter).