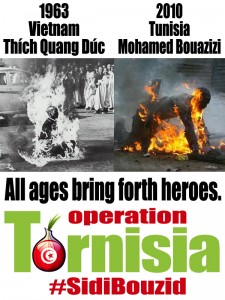 The antigovernment protests began a month ago when a college-educated street vendor named Mohamed Bouazizi in the small town of Sidi Bouzid burned himself to death in despair at the frustration and joblessness confronting many educated young people here. But the protests he inspired quickly evolved from bread-and-butter issues to demands for an assault on the perceived corruption and self-enrichment of the ruling family.

The protesters, led at first by unemployed college graduates like Bouazizi and later joined by workers and young professionals, found grist for the complaints in leaked cables from the US Embassy in Tunisia, released by WikiLeaks, which detailed the self-dealing and excess of the president’s family. And the protesters relied heavily on social media websites like Facebook and Twitter to circulate videos of each demonstration and issue calls for the next one.