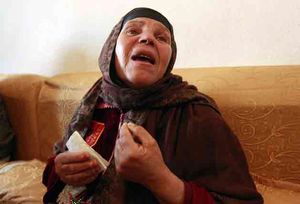 Tunisia: ‘I have lost my son, but I am proud of what he did’

The mother of the street vendor who set himself on fire, and triggered protests across North Africa, talks to Kim Sengupta

The street vendor who set himself alight, sparking an uprising which swept away 23 years of dictatorship in Tunisia and triggered protests across North Africa, had been beaten down by years of poverty and oppression by the authorities, his family told The Independent last night.

Mohamed Bouazizi – whose desperate act, copied in countries including Algeria and Egypt, has become a symbol of injustice and oppression – had lost his land, his living and had been humiliated by local officials.

Phi Beta Iota: The two-party tyranny that has disenfranchised the other 63 parties and a majority of US voters while legalizing Wall Street fraud, mortgage fraud, and Federal Reserve fraud has, since 1981, nurtured 42 of 44 dictators; since 2000 increased failed states from 25 to 175; since 2004 doubled poverty in the USA; and generally been so irresponsible as to call into question the future of the US Government.  Is a general strike or a tax revolt possible?  Electoral Reform is in our view the only non-violent option if the integrity of the federal government is to be restored.  Absent that, we see the USA breaking up into no fewer than nine regions, each refusing to pay for the military-intelligence-prison-homeland “security”-medical fraud that has destroyed the Main Street economy.  It’s time to self-insure and self-govern, ending the legalized crime called US Politics.  Nullification & secession are in the air.  Free and fair elections?  Not in the USA, not yet anyway.